Bernhard Schmid: "Karl May in the cinema is far from finished"

The series From the workshop, the publisher e, we use the "Story behind the Book" of "Old Shatterhand among gangsters" continued. Karl-May - publisher Bernhard Schmid tells what happened with this special book by his friend Prof. Dr. Albrecht Götz von Olenhusen is all about himself and how it fits into his publishing program around Karl May: 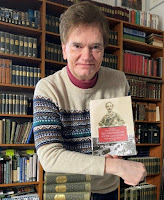 Bernhard Schmid with " Old Shatterhand among gangsters" : "Karl May is not only the most widely read writer in the German language, but also the most successful source of originals in the history of the German film industry with over 25 film adaptations"

Old Shatterhand among gangsters is a small homage and honor for our friend and author Prof. Dr. Albrecht Götz von Olenhusen on his 80th birthday and contains a selection of his most important and most beautiful contributions from the last decades on the subject of Karl May. They appeared primarily in the periodical publications of the Karl May Society (communications from KMG and KMG-Nachrichten) of which he has been an active and popular member since the 1970s.

We were aware that this book is more for Karl May specialists and collectors, but also for those interested in law, but the editor Jürgen Seul (also a good friend of Albrecht and us) and we wanted to please him and the author and honor.

Analogous to the motivation of Friedrich Ernst Fehsenfeld (Karl May's first publisher of the Gesammelte Reiseerzählungen) to publish Karl May's “Stories in book form, not in a magazine”, Götz von Olenhusen's articles, articles and reviews on Karl May that are worth reading and worth knowing are hereby intended can also be made available in one book.

We have recently published many other great new releases for the general public. The series “Karl May's Collected Works” in the well-known and popular green design has been expanded to include two remarkable volumes of letters (with the numbers 95 and 96). In “Correspondence with his 'children'” readers not only get important and exciting, but also moving, very private insights into the personality of the popular writer; They also document the commitment of the 'children' to the literary 'outlaw', which is very important for May's biography, and their tireless, sometimes quite adventurous efforts to publicly rehabilitate the often accused and vilified author.

Whereby the word 'children' can be seen in quotation marks, because Karl May had no descendants himself. It is about five fans who were so spiritually and spiritually close to the writer that his second wife Klara referred to them as his "children". These publications were edited by an outstanding team of Karl May experts, including high-ranking literary scholars.

At the end of last year we celebrated the anniversary “100 years of Karl May in the cinema”. The book of the same name was published at the beginning of November. Everyone knows the "Winnetou" films with Pierre Brice and Lex Barker, but hardly anyone knows that Karl May films were released in theaters as early as 1920. Even if these are considered lost, author Stefan von der Heiden dedicates himself to them as well as to the famous films of the 1960s and the parody “Manitou's Shoe”.

This makes Karl May not only the most widely read writer in the German language, but also the most successful source of originals in the history of the German film industry with over 25 film adaptations.

In addition, the topic of "Karl May in the cinema" is far from over: In February 2022 (thanks to Corona with a delay of more than a year) the new children's film "The young chief Winnetou" will be released in which the Indian will prove his father wants him to have what it takes to be the chief of the Apaches. The target group are children between the ages of six and twelve. We will publish the right fan book for the film. The producer is SamFilm, who have already caused a sensation with the “Ostwind” series, the “Five Friends” and the “Wilder Kerlen”, so they know exactly how to inspire the young generation.

We hope to "bring Karl May into play" again in the book trade.