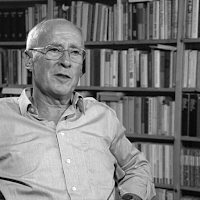 East German screenwriter and script editor Gerd Gericke died on August 7, 2021 in Potsdam, Brandenburg, Germany after a long illness. He worked as at East Germany’s ‘Hollywood studios’ – Deutsche Film-Aktiengesellschaft, better known as DEFA – and worked on the Oscar-nominated book adaption, Jakob der Lügner. Gericke was born in Behnsdorf, Saxony-Anhalt, Germany on April, 20, 1935. After his DEFA career he became a professor at the University in Potsdam. He was married to Gabriele Herzog and was the father of singer and DJ Nik Sleazy (Henryk Gericke). Gerd wrote the screenplay for 1979’s “Blue Bird” and was a script advisor on “Sing, Cowboy, Sing” (1981), “The Scout” (1983) and “Bloody Heart” (1986).
Posted by Tom B. at 8:22 AM