Who Are Those Composers? ~ Eddie Warner 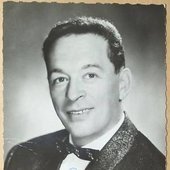 Eddie Warner was born Warner Blumann in Magdeburg, Germany. As a German Jew, he had to leave Germany in 1934 when Hitler came to power. He continued studying piano and trumpet at the Strasbourg Conservatory in eastern France. The situation worsened and he had to flee further west, to Paris, where he was a refugee. He enlisted in the French Foreign Legion until the end of the war, where he became a bugler. After the war he played the piano in Paris nightclubs. He created his orchestra, which specialized in tropical music, composed of 17 musicians paid on an annual basis. That’s when he first met Lalo Schifrin, then a refugee touring with a South American band. Eddie hired Lalo as a musician and arranger for his orchestra, while helping him to obtain his papers...