Who Are Those Composers? ~ Bernard Segall 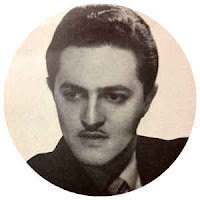 Bernardo Segall was born in Campinas, São Paulo, Brazil on August 4, 1911. He made his professional debut as a pianist at age 9. At Age 16 he traveled to the United States, where he studied with Alexander Siloti and, at 21, made his American debut at New York's Town Hall, later performing in orchestras such as the New York Philharmonic. Segall also had an uncle who was a well-known painter in Brazil named Lasar Segall. In addition to performing as a concert pianist, Bernardo Segall also maintained an additional career as a composer for theater, ballet, film and television. Segal was married to dancer and choreographer Valerie Bettis for 12 years, and he composed many pieces that she danced in. He scored films such as “The Great St. Louis Bank robbery” starring Steve McQueen, “The Luck of Ginger Coffey” and “Custer of the West”, and wrote music for TV series including ‘Columbo’, ‘Airwolf’ and the 1976 documentary ‘To Fly! Bernard Segall died in Los Angeles, California on November 26, 1993