Several locomotives worked continuously on film shootings in Guadix and Shire, almost all of us know the 140-2054, which now sits in the depot's garage waiting for them to be used in new projects that are already in the planning stage to bring it back to life but there were two more locomotives that appeared in countless shoots and we will relate briefly below:

1 (a) The locomotive 030-0211, former Andaluces Company, manufactured by Kerr Stuart in 1900 and purchased by the Guadix depot almost from the beginning of its operations, until unfortunately it was scrapped in 1967. 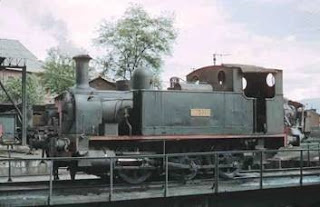 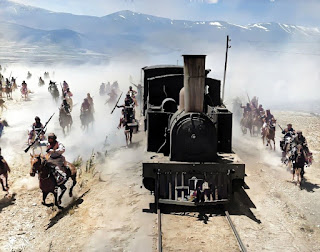 2 (a) Locomotive 040-2169. This unit did not serve as such in the area of Guadix but, it was necessary to back-up the number of engines intended for the many film shootings, in the company of 140-2054, it starred in many famous films, including ′”The Good, the Bad and the Ugly”, ′”For a Fistful of Dollars” and ′′Navajo Joe". This locomotive, manufactured in 1884 by Richard Hartmann, passed in 1891 to the Marques de Salamanca railway in 1897 to the Northern Railway Company And in 1967, it was awarded to Guadix's depot for use in cinematic filming, which saved her from the scrapheap like many of her serial colleagues. 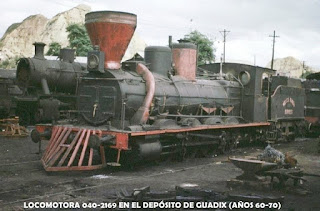 In the photos, you can see 040-2169 during the film “Navajo Joe” with Burt Reynolds, in the second scene of  “The Good, The Bad and the Ugly” at the La Calahorra station and the various scenes in films. The last photo corresponds to the decline in filming and thus the abandonment of locomotives in the Guadix depot in the 1980’s. As a lesser evil than at least it has allowed it not to succumb to dismantling and scrapping, it was loaned by its owner, the Spanish Railways Foundation, to the City Hall of Los Barrios, along with Algeciras, where it is situated in a park and survives today, if the project to recover the deposit and workshops of the station were executed in Guadix should consider the possibility of, in the medium to long term, requesting its return to restore it and recover it for the use it was intended in 1967, as a historical industrial element for filming and filming and a great tourist attraction in the company of her colleague, 140-2054. 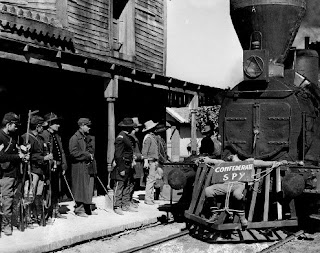 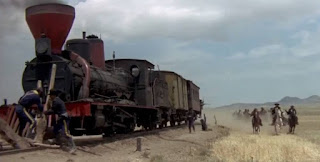 3 (a) The locomotive 140-2054. Our old known, the locomotive 140-2054 and its storage barn, which were built in Spain by Bilbao's Babcock and Wilcox, which first served in the Andaluces company with number 4.106 And from 1941, in RENFE received its current numbering, the 140-2054. intended from the beginning to tow freight trains on the Almerería-Guadix-Baza line, where it was relieved by 130 heading to Lorca , went through a time similar to the 040 cited in the late 1860’s of the past century with the decline of steam traction and, in the company of it, became one of the two units assigned to the deposit of Guadix for use in filming. Like the 040-2169’s, in the late 1980s she was in bad shape at the Guadix locomotive depot, although in better condition than this due to the care of some veteran railroaders who tried to keep her as best as possible while waiting for some intervention to return it to its splendor, which came from the hand of the transfer by its owner, the Spanish Railways Foundation to Guadix City Hall in 1998 and its restoration in ARMF workshops in Lleida. The ephemeral launch in 2001 of the tourist train “Shire of Guadix” demonstrated the virtues and defects of a magnificent project in its conception but needed technical support and material that did not occur and had to have started, in my modest opinion, more progressively. The parenthesis of transfer to a private company to reactivate the project proved that once again the intention was magnificent by the Guadix City Council but it was not the way for this project to come to a good end, now the locomotive has depleted its operating potential and needs repairs that should be done with local staff training and building a stable technical team and minimally conditioning the locomotive depot facilities for this purpose. All this is possible and is being valued by who should do so, hopefully the immediate future will bring us good news and Guadix regain what she should never lose and be proud of her trains and its railways and fans across the world of which there are many. 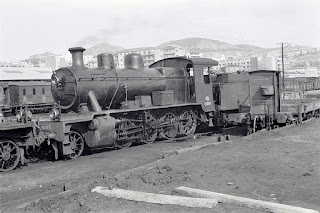 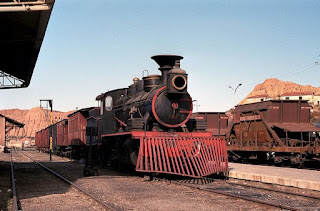 I leave you different footage of filming in which the 140-2054 and scenes of circulation and maneuvers participated, my apologies for the extension of the publication, it has been very difficult to summarize the great story of these three units, I hope it was to your liking , a warm greeting, Rafael 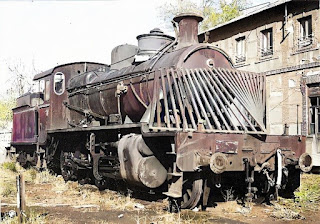