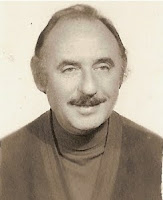 Antolin García was born in Barcelona, Spain on April 5, 1928. He began taking building engineering studies, which he combined with sports, becoming a University athletic champion in Spain. He quit his studies to begin a career in radio. Antolin started as an apprentice on the University Radio SEU, and afterwards began his professional career at Radio Intercontinental, and then in Radio Nacional de España. Beginning in 1952, García began work in dubbing, becoming the Spanish voice of actors such as Cary Grant, Glenn Ford, Alain Delon, Peter O’Toole and Albert Finney. He later began q television career in TVE. He was a  presenter on different kinds of shows, but his specialty was sport broadcasting; among others he covered the 1980 Summer Olypmpics in Moscow and the 1984 Summer Olympics in Los Angele. In 1970, García was handed an Antena de Oro award for his radio work.