The legend has turned 85 and is preparing to give his autobiography to the press. The story of an exile who became a spaghetti western star from the bombs of Zara to the guns of Sartana Gianni Garko writes the film of his life.

Before the sun goes down I want to take a bath in blood! ~ This is how the gunslinger Sartana in the film "$1,000 on the Black" shouted, calling for revenge under the fiery sun of the West. The Zadar actor Gianni Garko, who in full Covid celebrated his 85th birthday, played him.

Having now entered the Olympus of western Italian heroes, Sartana in 2021 "will turn" 55 years after its first cinematic release. Its name is due to a play on words by its creator, Vittorio Salerno, who merged together the names of the philosopher Jean Paul Sartre, the Mexican general Santa Ana, Sartana and the most loved fruit, the pineapple as fierce as it is crazy, thanks to the charm of Gianni Garko, Sartana quickly became an icon of international cinema and for the actor a great success., - in that film - explains Garko - Sartana was a sort of wild madman, the antagonist of the hero played by Anthony Steffen. But it was such put on the bill under the title –

How did your adventure in the Italian western start?

“I had concluded a great international tour with the Piccolo of Milan - answers Gargovich / Garko; we had staged “Le baruffe chiozzotte” under the direction of Strehler. I had the great photographer Pietro Pascuttini (descendant of a noble Friulian family) who made some photos with a plaid shirt worn as a poncho. Thanks to those shots they called me to interpret "$1,000 on the Black". Thanks to the success of this film I started doing many other westerns. But this character received so much acclaim, especially in Germany, that later they proposed to me to interpret it as the protagonist. Even now I receive letters and messages from all over the world for the series of films I made in the role of Sartana: it has remained in the history of the western.

Where did you shoot your Westerns?

“Western villages were built around Rome. It is a pity that they have not been preserved as it has happened in other countries. We shot the exteriors in particular in the Magliana quarries. Then for other films we also shot in the highlands of Abruzzo and sometimes in the Almeria desert." Sartana was famous for his white horse and his speed with his pistols. “In these films we always had to stay in the saddle for hours. Fortunately, like Giuliano Gemma and Franco Nero, I had made historical films before the western, where I had learned to ride a horse. So it was easy for me. In order to learn how to quickly draw the pistol, however, I trained continuously. In the end I had become so good that when they disarmed me in the film, I was able, without any makeup, to get my guns out of my jacket sheaths, grip the handles and shoot el volo" 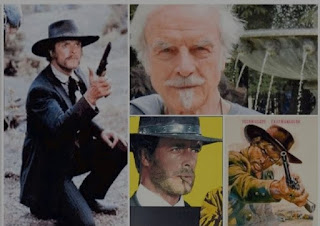 This year marks a hundred years of the Rapallo Treaty, in which Zara and part of Istria became Italian. What do you remember about your life in Zadar?

“I lived my childhood in a period of wars, very difficult. I stayed in Zadar until I was13 years old. I still remember in 1943 when it began to be bombed. My family didn't leave right away. We moved to Veli Lošinj with I Cecconi, other Zaratini we were friends with, on board the steamship Samsego, and then returned to Zadar in 1945, where we found the Yugoslav partisans. We only managed to reach Italy in 1948. My father was a technician in the fishing net factories, so luckily, he always easily found work anywhere. As exiles we first reached Trieste, then Venice and then Chioggia, finally passing through to S. Giovanni da Duino ..."

Have you ever returned to Zadar?

"After thirty years. I thought not to get excited, but when from the steamer I glimpsed the profile of the bell tower of the cathedral of Saint Anastasia I burst into tears. I've been there several times since. In Isola Lunga, Dugi Otok, where my family originates, I wanted to bring my parents' ashes. In this time I am writing my autobiography, where I am also collecting all the memories related to Zara. It will be called "The Film of Our Life". On the cover I want to put a large lighthouse assaulted by the waves, like that of Veli Rat on the Long Island."

You are also very attached to Trieste.

"In Trieste I went to the university and then the Teatro Nuovo school as an actor. I put my foot in the cinema starting from Trieste, because a historic photographer of the city, Cerretti, put a photo of me on the bulletin board that overlooked the Corso: a director from Rome saw it and I am in Cinecitta for some auditions together. to the Trieste-born actress Federica Ranchi."

“With Covid everything has stopped. They had offered me a horror film, "The Goldsmith", with the screenplay by Germano Tarricone. In the cinema I have done all genres, but apart from “La note dei davoli” with Agostina Belli, based on a novel by Tolstoy, I've never done horror. I would have loved to have been in a horror story."

"Generally I prefer the antagonists because they are more complex and tormented. In the theater I would love to film "The Exorcist" I did in 2019, but also the monologue "A voice from hell", which is the story of an old actor, it really takes a lot."