Who Are Those Composers ~ Aaron Schroeder 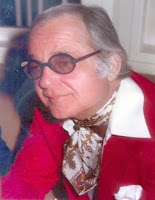 Aaron Harold Schröder was born in Brooklyn, New York on September 7, 1926. He was a songwriter, composer, music publisher, producer and head of Musicor Records, Inc. and A. Schrieder Music Corp. Schroeder's first success "At A Sidewalk Penny Arcade" introduced Rosemary Clooney as a solo recording artist. Schroeder is best-known for his composition "It’s Now or Never" which was an Elvis Presley #1 hit and the all-time international best seller. Also, It is listed at #75 on Billboard's Greatest Hits of the last five decades chart. He co-wrote 17 other songs for Presley, five of which went to #1 "A Big Hunk O Love" "Good Luck Charm" "Stuck On You" and "I Got Stung." Other artists who recorded his songs were "French Foreign Legion" Frank Sinatra, "Mandolins In The Moonlight" Perry Como, "Time and the River" Nat King Cole, "Love Makin' Music" Barry White, "I Got Stung" Paul McCartney, "Hammer and Nails" The Staple Singers, "Move Me No Mountain" Chaka Khan and "Today's Teardrops" Roy Orbison. As a music publisher Schroeder discovered well known songwriters such as Randy Newman, Irwin Levine, Gene Pitney, Al Kooper and Barry White. Schroeder's songs have been included in hundreds of films and television programs including, “The Hangover”, “Lucky Luke”, “Viva Elvis Cinque Du Soleil”, “All Shook Up”, “Lilo and Stitch” and “Aloha from Hawaii”. Schroeder wrote over five hundred songs that spans a spectrum of musical prolificacy from pop, rock and country to children, gospel and standards. He Founded of Musicor Records. Schroeder died in Englewood, New Jersey on December 1, 2009.