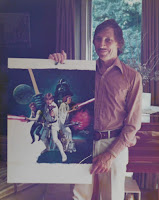 Thomas William Chantrell was a British illustrator and cinema poster artist. He was born in Ardwick, Manchester, England on December 20, 1916, the son of Emily and James Chantrell, 64-year-old trapeze artist and jazz musician. James had toured music halls around the world performing in a trapeze act called "The Fabulous Chantrells". Chantrell grew up in a family of girls, the youngest of nine children.

Chantrell displayed an aptitude for commercial illustration when, at the age of five, he was asked by his teacher at Armitage Street School to paint a picture of the character Tom from Charles Kingsley’s book “The Water Babies”; the teacher was so impressed by the young Chantrell's artwork that she paid him one penny for the painting.

At grammar school, Chantrell's artistic skills were fostered by his art teacher, and at the age of 13 he won a national competition run by the League of Nations to design a poster promoting disarmament. He left school aged 15 and went to Manchester Art College, but quickly became disillusioned and left soon after to enter employment

Within days of leaving college in 1933, Chantrell found a position at a local advertising agency, Rydales, leaving a few months later to join another agency where he worked for about year. Chantrell's position ended after he was wrongly blamed for a substandard piece of work; after a violent disagreement with his manager, Chantrell was fired. Unable to find any more work in Manchester, Chantrell moved to London in 1934 to live with one of his sisters, Phyllis, in Homestead.

He took up work at a printing company, where he developed his skills in silkscreen printing. After two years, he moved to a small design studio, Bateman Artists, on Carmelite Street, near Blackfriars Bridge. Batemans shared a building – and design work – with a larger agency, Allardyce Palmer, who sub-contracted Batemans work for industrial clients such as British Aluminium, and Percival Provost. 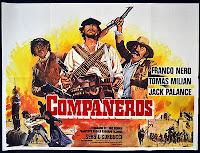 Allardyce Palmer had just won accounts with two emerging film studios, Warner Brothers and 20t Century Fox; a cinema was not considered an especially glamorous industry at the time, the work was also passed on to Batemans. Through this association, Chantrell he had the opportunity to start working on cinema advertising, designing his first film poster in 1938 for “The amazing Dr. Clitterhouse”.

In 1950 Batemans was bought out by Allardyce Palmer, and the merged agency continued to receive a lot of work through Warner Brothers' film distributor, British Pathe Poster artist Tom Beauvais joined the company as Chantrell's assistant. In 1957 Chantrell was made art director of Allardyce Palmer's new Entertainments Publicity Division in Screen House on Wardour Street, Soho. Film work flooded in, and Chantrell worked on a number of epic films such as “East of Eden (1955), “The King and I” (1956), “Anastasia” (1956), “Bus Stop” (1956), “An Affair to Remember” (1957) and “South Pacific” (1958).

Chantrell worked for both horror film production companies, Hammer Films and Amicus Productions, and for a few years worked as the "house artist" at Hammer, designing celebrated posters for films such as “The Nanny” (1965) and “Taste the Blood of Dacula” (1969). For Amicus, Chantrell produced publicity for a number of fantasy films based on the books of Edgar Ric Burroughs, including “The Land That Time Forgot” (1975). His paintings from this era have been noted for their lurid use of color to emphasis elements of primordial horror and for their use of bold, red block lettering to convey a sense of shock, as exemplified in his posters for “One Million Years B.C.” (1966) and “At the Earth’s Core” (1976). Chantrell's “One Million Years B.C.” poster was based on a very popular publicity photo of actress Raquel Welch in a fur bikini that became something of a cultural phenomenon and a best-selling pinup picture.

Chantrell designed many posters for the Carry On film comedy series. Some of these films were conceived as parodies of other contemporary movies, and Chantrell correspondingly produced pastiche artwork of the original film poster. On at least two occasions this led to problems with copyright; his poster for “Carry On Spying” (1964) had to be changed to avoid looking too much like the Renato Fratini poster for “From Russia with Love”; and his initial “Carry On Cleo” poster (1964) was pulled and redesigned after a lawsuit from 20th Century Fox alleged that his send-up bore too much resemblance to original Howard Terpning “Cleopatra” artwork.

In the 1960s Chantrell was often drawing artwork for 5 different films or double bills at one time.

In 1977 Chantrell was commissioned by 20th Century Fox to produce poster art for the British release of a space fantasy film, “Star Wars”. Several promotional posters had already been produced to advertise Star Wars prior to Chantrell's involvement; artist Tom Jung was initially commissioned by Fox to create a poster, which was used to advertise the USA release. Now known as Style ‘A’, this artwork was considered by Lucasfilm to be "too dark" and they commissioned a reworking of the image from the Brothers Hildebrandt, and their Style ‘B’ poster was distributed to UK cinemas. Because these posters had both been produced while Star Wars was still in production, the artists had worked without reference to photographs of the actual cast. Fox executives considered the posters too abstract and were keen to commission a new version with fully realized likenesses of the lead actors.

Among films he designed the artwork for were “The King and I”, “Von Ryan’s Express”, “The Anniversary”. 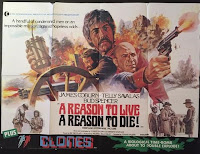 Chantrell's career dwindled from the early 1980s. His portfolio had mostly been built up working on posters for exploitation films, horror movies and British sex comedies, and as these film genres went out of fashion, so too did his style of illustration. As design trends shifted towards computer-based desktop publishing, demand for original artwork for film posters dropped. Chantrell moved into designing cover art for home video titles, but eventually was forced to retire.

In his later years his work found new appreciation with the growing interest in collecting film memorabilia. 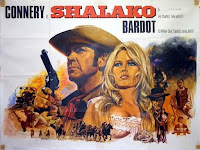 Tom Chantrell married his first wife, Alice, shortly before the start of his military service in 1940. Together they had two children, Stephen and Sue. In 1962, while he was attending life drawing classes in St. Martin’s School of Art he met an 18-year-old Chinese student, Shirley How Har Lui. They began a love affair and moved in together in 1965. In 1968, Shirley gave birth to twin daughters, Jacqui and Louise. After nine years, Tom and Alice divorced, and Tom married Shirley.

Tom Chantrell died in a hospital aged 84 on 15 July 2001, after suffering a heart attack.