We continue our search for filming locations of “A Bullet for the General”. After the automobile ride the bandits and Raimundo’s men return to San Miguel for a celebration of their liberation. El Chucho and Raimundo demand a new leader be named to replace Don Felipe, one who can read and write and is from San Miguel. The crowd calls for Pederito who is a young man but one who loves his village and he is given the position of head man of the village. 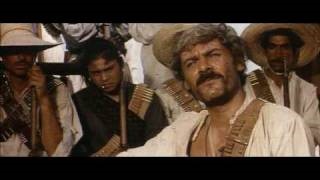