Don Felipe is forced to drive the bandits through the countryside. When the horses pass the auto El Chuncho wants to know why and when Felipe tells him there are too many men in the car, El Chuncho order several off and then sits back and enjoys the ride.

This scene was filmed in the Hernan Valley near Guadix, Spain. 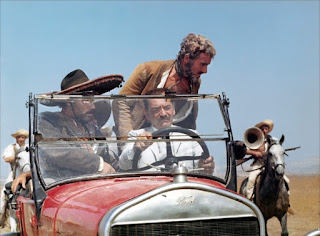