El Chuncho along with several of his men and Raimundo go to Don Felipe’s hacienda. Before arriving Felipe and his wife Rosaria argue over fighting the rebels. Felipe refuses to fight and becomes ill and retires to another part of the house while Rosario meets the rebels. She asks them to sit at her table and offers wine and food to her guests. The villagers ask for land and when Don Felipe emerges and asks why they wasn’t to kill him? “Because he is a rich man?” And Raimundo says, “No, because they are poor men and Don Felipe has done everything, he can to keep them that way.” Felipe asks El Chuncho a favor, that he can say good-bye to his mother and that they spare her and Rosario from being killed. El Chuncho asks Raimundo and he says Bueno. After Felipe says goodbye to his mother. The men start to molest Rosario and when Bill tells them to stop Guapo attempts to shoot him but El Chuncho shoots and kills him. When Cirillo asks him why he says Bill is a friend of his and Guapo is no more. The men leave the hacienda to see Felipe’s automobile. 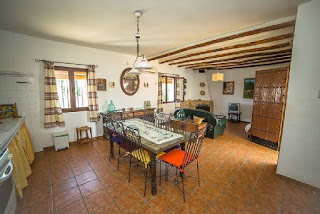 This scene was filmed in the interior of Cortijo del Romeral.