How That Iconic Western Whistle Theme Was Born 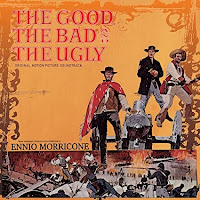 The Good the Bad and the Ugly is known for being one of the most esteemed western films of the last century and for having the most memorable film scores in Hollywood history. The 1966 film, starring Clint Eastwood (as The Man With No Name), Lee Van Cleef (Angel Eyes) and Eli Wallach (Tuco), is synonymous with its theme music, which has become a shorthand for spaghetti westerns and standoffs between stoic men in dusty locales in popular culture.

The theme music is the work of Italian composer, orchestrator, conductor and trumpet player Ennio Morricone. Morricone worked with director Sergio Leone before filming began to insure that the music would inspire the flow of the film.

"In the films that established his reputation in the 1960s, the series of spaghetti westerns he scored for Mr. Leone, Mr. Morricone's music is anything but a backdrop," The New York Times critic Jon Pareles wrote. "It's sometimes a conspirator, sometimes a lampoon, with tunes that are as vividly in the foreground as any of the actors' faces."

Morricone scored Leone's entire "Dollars trilogy," made up of A Fistful of Dollars, For a Few Dollars More and The Good, the Bad and the Ugly.

The instrumental theme opens with a melody mimicking a coyote-howl and sets the stage for the film and symbolizes the movie's three main characters.

In Ennio Morriconi: In His Own Words, the composer explained how he created the "wah-wah-wah" sound that permeates the film.

"I thought that I might come close to this effect by overlaying two hoarse male voices, one singing "A" the other singing "E" somewhere in between sforzato and falsetto. I went to the recording room, talked about it with the singers, we recorded the voices and added a light reverb and the effect worked," Morricone said in Ennio Morricone: In His Own Words (quote via Oxford University Press). "Then I continued this incipit by emulating vocal sounds through the wah-wah effect, which trumpets and trombones obtain by moving the damper back and forth, an effect typical of brass bands in the twenties and thirties."

The soundtrack, featuring classical guitarist Bruno Battisti, conductor Bruno Nicolai, vocalist Edda Dell'Orso, whistling by Alessandro Alessandroni, electric guitar by Pino Rucher and Nicola Samale on flute, is as revered as the film itself, peaking at No. 4 on the Billboard 200 chart. The main theme was even a pop hit for Hugo Montenegro, which hit No. 2 on the Billboard pop charts in 1968.

In addition to the film's main theme, Morricone's "The Ecstasy of Gold," which plays while Tucco (Wallach) is searching a cemetery for a grave with $200,000 in gold coins, one of the most iconic and memorable film scores of all time.

In his lifetime, Morricone wrote over 400 scores for television and motion pictures, including Once Upon a Time in the West, Cinema Paradiso, The Untouchables, Mission to Mars, Bugsy and Quentin Tarantino's The Hateful Eight, for which he won his first competitive Academy Award.