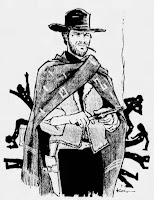 Absolutely the best thing about the Spaghetti Westerns (“A Fistful of Dollars,” “For a Few Dollars More,” “The Good, the Bad and the Ugly”) is that they are hysterically funny. Oh yes. And they supply the only real, honest-to-goodness perfect hero to hit the screen in a long time.

That they’re so funny might astound those who have hitherto considered them uncommonly brutal. But, the fact remains that no man in his right mind would turn out films like that seriously. And Sergio Leone, who created the triumphant triad, is nobody’s fool.

He’s taken the American Western, striped away all the moralizing accoutrements, and come up with the bare essentials: steaming guns, glaring eyes, dusty boots, beat-ups, snarls, villains, and, of course, the hero.

What he’s done is present a wide-screen, highly animated wax museum. All the essentials are there but none of the essence.

In the two Leone films now circulating for the second time at the Shore and other areas in the country (“Fistful” and “Dollars”), there is this perfect man – who wanders into towns ridding them of the bad guys. That may sound like the old Western pattern, but it isn’t. In this case the hero is entirely amoral. He acts not out of a sense of “right” or “wrong” but out of sheer physical necessity. It usually turns out to be a case of kill or be killed, and he NEVER kills anybody who doesn’t ask for it. Strangely enough this trait makes him the good guy

Can you imagine a hero without an inner struggle? Who ever heard of it? Leone heard of it. His hero (and his villains) are pure action, no hang-ups, and its absolutely refreshing to be confronted with a film at long last which allows you to “hate” the bad guys and “love” the god guys without having to realize the problems behind the actions. We can really HATE the villains because we don’t know anything about the fact that they were beaten, or deserted, or otherwise abused as children. Nobody asks us to “understand” the inhumanity which made them rotten.

It is this blessed fact which if we keep things in their proper perspective, enables us, as adults to see a movie the way we did as kids. Kids never see all the little under-currents of moral justices and injustices. They see the action. They know who’s good and who’s bad and that’s it. For them movies are sheer entertainment. So are these three Spaghetti Westerns.

The fact is we do rally ‘round the good guy. We cringe when he gets beaten up, cheer when he lets them have theirs, and sigh a mighty breath of relief when he comes out the winner. But, along with all this naïve involvement, we must realize what’s happening and try to keep from falling in the aisles laughing.

For instance, the strange tendency of the camera to focus for interminable lengths of time on sets of eyes, sets of guns, sets of boots, sets of anything you can imagine, as a way to build up tension. It’s hilarious! And the music is unbelievable! It pierces the funnybone as it constantly melodramatizes every movement.

These “confrontation” scenes – if nothing else – should convince the viewer that the whole thing is being done in good fun. There’s a scene in “The Good, the Bad and the Ugly” for instance where the camera swings from The Good to the Bad to the Ugly for a full five minutes. Back and forth, back and forth it goes – it’s unbelievable! Right then you know for sure this guy Leone is having at us.

Who is Leone to desecrate so sacred an American institution as the Wester? Well he’s an Italian who makes Westerns in Spain using Italian and Spanish actor, with one or two Americans thrown in for good measure.

Before turning to the never-failing Western theme a few years ago, Leone was churning out epics of Rome in its earlier, bloodier days. But people, including the Italians, were growing a little tired of the old tiger-eating Christian bit and the morality message by the way of arts was on the downswing everywhere.

So, casting an eye toward the American West, as redigested and spewed forth for television audiences, the enterprising young producer-director (38 when his first “oater” – “A Fistful of Dollars” was distributed here) found the perfect image to star in his Westernized version of a Japanese samurai film, Kurosawa’s “Yojimbo”.

That image belongs to Clint Eastwood, then star of the TV “Rawhide” series. Eastwood is a spaghetti thin length of a man who could (and certainly did) scruff up nicely for his new role as a cheroot-smoking, fast-shooting stranger in Leone’s money-making horse flicks. He’s perfect in the role – grubby looking but not surly, casual almost to the point of being lethargic, but electric-fast when necessary; strangely moral without the benefit of the usual understanding of the term.  He is the hero we’ve all been missing these long years. Maybe he’ll even replace John Wayne.

Leone said about a year ago that he would make one more Western before turning his attention to something like prohibition in the United States. He said it would be the Western to end all Westerns - the final statement in depiction of the American West. That’s a pretty optimistic aim and probably unattainable by anyone.

When you come right down to it, thought, whether or not it makes it as the “ultimate” in Westerns (provided it’s made) doesn’t really matter. All that counts is that it will undoubtably make it big at the box offices just as the last three have and that, unless Leone loses his sense of humor, it will be another hilarious adventure. 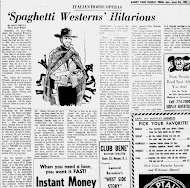