Guadix asks for the Goya of Honor for its Baldwin locomotive 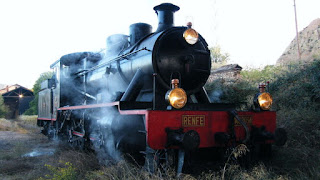 What do Indiana Jones, Doctor Zhivago, The Good, the Bad and the Ugly, Death Had a Price , The Peacemaker,  For a Few Dollars More, or Lawrence of Arabia have in common? In all these famous films (many of them absolute adventure and western films) the Baldwin appeared. The beloved Acitana steam locomotive was one of the fundamental pieces of many of the Spaghetti westerns that were shot between the 1960s and 1970s in southern Andalusia. Now, Guadix asks for the Goya of Honor for the locomotive, one of the last that still runs on coal in Spain.

A petition in Change requests that the Film Academy recognize the merits of "the most international actress there has been in the national industry." "The Baldwin de Guadix locomotive has a cinematographic curriculum not even dreamed of by any professional of the seventh art," says Juan Jesús García Ramos, the promoter of the proposal on the online platform. "Join this petition so that our 'Valbin' is recognized as the 'Andalusian interpreter' with the greatest projection with an award for her merits as she approaches her first century of life," encourages García.

Its filmography includes great film milestones such as Indiana Jones, Doctor Zhivago, The Good, the Ugly and the Bad, Reds, Good Morning, Babylon, Emerald City, For a Few Dollars More, The Peacemaker, A Fistful of Dollars , The Legend of Frenchie Kin, Lawrence of Arabia , The Price of Power, Northwest Frontier, Viva Carranza , The White, the Yellow the Black,  What Am I Doing in the Revolution, Blood for a Silver Dollar, $ 20,000 for Every Corpse, Diego Corrientes, Apunta y dispara , Duck You sucker, Red Sun , Once Upon a Time in the West, The Wind and the Lion.

"Guadix has a brilliant past and this locomotive was a shining star along with actors of the stature of Harrison Ford and Clint Eastwood, among others. We are proud of a glorious past and that it serves as an impulse to achieve the future that Guadix deserves" says Jesús Jiménez in a comment. The machine was built in Bilbao almost a century ago (specifically 1928) and was in operation until 1956. Afterwards, its retirement did not prevent it from appearing in great classics of the seventh art.