In November 1960 I received a letter from Niels Larsen, a Dane, that left me in very little time to prepare my suitcases and return to Madrid. I then met my former boss [Larsen, later producer on "Savage Guns"] at Ballesteros Studios, who at the time were on García de Paredes Street, and when I entered the site, I realized that I had discovered the world in which I wanted to spend the rest of my life. That was my first contact with film production and since then I haven't even thought of changing my trade.

That day they were rolling a few tests of light and makeup on two actresses: Silvia Solar - a spectacular blonde - and Elisa Montes, famous for being married to Antonio Ozores, and being sister of Emma Penella and Terele Pávez. The tests were conducted by Niels Larsen and the cinematographer Michel Kelber. The film's protagonist was French based star Eddie Constantine, born in the USA and very popular for starring in a series of feature films about a fighting detective. I remember him being very friendly, intrigued that I had a Finnish fiance (Tarja, who would later be my wife). 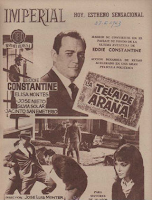 The script for ""Tela de Araña" " had been written by Niels Larsen, with the help of Gudie Lawaetz.On set we had three directors: Larsen himself, José Luis Monter, who was there for-tax purposes due to the National Show Syndicate, and Guy Lefranc, a delegate director sent by the French co-producer. Such "arrangements" were very common in those days and people would manage to more or less work in those conditions.

When the filming of "Tela de Araña" aka 'As If It Were Raining' was finished, Augusto Boué recommended me to director Eduardo García Morato, who was preparing an independent American film that was to be shot entirely in Spain. Directed by George Sherman, it was called "Wounds of Hunger". It was produced by Saul Swimmer and Stan Torchia, with Mark Damon, Brud Talbot, as the protagonists, along with Tony Anthony and Luciana Paluzzi [later together in "Cometogether", about a spaghetti western stuntman]. 'Hunger' did not finish shooting due to lack of money [completed in 1967], even though Talbot was a friend of the American millionaire du Pont [William du Pont III ?], who financed the film. During filming, several production crew teams were fired and their positions resigned and I ended up being the trusted person of these young producers. Most ended up succeeding, or at least earning a living, with several of them I agreed in the future to work with. 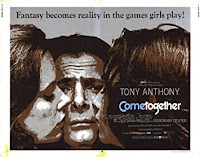 I never lost contact with Augustus and Juanita, the people in Niels Larsen's office. The three of us went out together, we were going to dance, to snack. Juanita and Augusto had to return to their homes before ten o'clock, because that's what the customs of the time. Augustus demanded I stay with his wife, Consuelo, and her sister, Pilar, who was married to film critic Luis Gómez Mesa. It was also Augustus who recommended me at Ocean Films, a production company newly formed by Jaime Comas and Alvaro Núñez M. Maturana, a lawyer. Jaime in turn had a cousin, Francisco Pepe Subirana, who had enriched himself by selling cement in Tarrasa after the famous 1962 flood, and with that money, and distribution advances, contributions from foreign co-producers and some "scrawing" money from the Banks, managed to launch "Outcasts of Glory" and "Sandokan, the Great". Ocean, found in me an awake and trustworthy worker to send as a film payer to Barcelona.

The new work began with a trip to Barcelona, that took Tarja and myself - for a holiday, with me, in the back seat, and a sergeant of the Civil Guard, in the front, assigned to guard the weapons for "The Outcasts of Glory", that we delivered from Madrid. We arrived very late at night at the Abbreviated Residence, where I stayed for the next six months. My life in Barcelona proved very informative, and basically consisted of me paying the salaries and meals of team members on a daily basis and once a week. I was also included among my obligations a weekly trip to Tarrasa to "collect" money from Mr. Subirana. From that time, I remember my first encounters with Steve Reeves ("Sandokan"), Maurice Ronet and Curd Jurgens. My life was complete with visits to the alterne bar "La Cuadra" and the Hotel Autohogar del Paralelo, where prostitutes, whisky smugglers and film technical teams from Madrid were staying. During these times I got to know the director of photography of "Los parias de la gloria", Federico Larraya, [later an assistant on 'Fistful'].

[With Joseph Cotton during "White Commanche"] 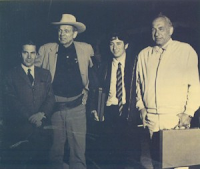 On my return to Madrid, I was very well received by my bosses, Jaime and Alvaro, who offered me a steady job and an office for me alone in at Castellana 66 offices and so I became "administrator". "The Spontaneous" and "For a Fistful of Dollars" were Ocean's next third and fourth films and, unfortunately, the demise of the company. "El espontáneo" aka 'The Spontaneous' was Jorge Grau's second feature.

But the film that crippled the company was Sergio Leone's "For a Fistful of Dollars," with the producers Giorgio Pappi and Arrigo Colombo. The preparation was very long [January to April, 1964], all of it paid for by the Spaniards, and the filming, was very bumpy, and it ended up bankrupting Ocean. The lead actor was to be Henry Fonda, who failed to sign on, and then the names of all the actors of the "The Great Escape" were suggested, such as Charles Bronson, James Coburn, and even Henry Silva. Finally, for a ridiculous low price (even at the time) $15,000, the rawhide co-star, a Clint Eastwood, was hired. I remember it was my turn to pick him up in Barajas, then a tiny and provincial airport, and take him to the Torre de Madrid apartments, where I gave him his first pay & meal allotments: 1,500 pesetas for each day: 10,500 pesetas total for the first seven days.

Of course, being the money manager gave you special importance at the time (it still does) and almost everyone treated you with more or less sincere interest and sympathy. At that time and from that position I made many friends. Some asked me to take care of the wives during their absences and others, like some gypsies who had played Mexicans in "For a Fistful of Dollars," decided not laeve my sight, day or night until they were paid what we owed them. We all ended up at Thetouan police station to sort it out.

Production problems (i.e. lack of money), three or four more weeks of filming remained and many unforeseen expenses led the Ocean producers, to default to bankruptcy. Before this [November 1963], during a visit to my girlfriend in Finland, I had suffered a serious car accident and ended up in the hospital the same day President Kennedy was killed. Nine months of rehab followed with a bad right leg; I was awarded generous compensation from the Helsinki insurance company. All this money and part of my previous salaries went to pay off debts from the filming of "For a Fistful of Dollars." My bosses recognized my loyalty and dedication by making me the number one creditor of the company and, when the company was auctioned off in a Court of Madrid, I had the Reyzábal family - who were the ones who were awarded the damages - the 562,000 pesetas that I was owed. With this money and the project "Joaquín Murrieta" in hand, which had been developed at Ocean, I began a new stage of my life.

George Sherman, director of the unfinished "Más cornadas da el hambre" aka "Wounds of Hunger" [1963-67], stayed in Spain and was hired by Manolo Goyanes to supervise the Marisol film "La Nueva Cinderella". Stan Torchia, who also stayed, and I developed "Joaquín Murrieta", which in principle was to be made by Ocean, but with the closure of this production company I retrieved the script and took the project to Impala, the new company run by José Antonio Sainz de Vicuña. There I re-met Augusto Boué, who was hired by them as production manager. My participation in this film was very indefinite, although I attended filming daily. During filming I became close friends with Arthur Kennedy and his wife, with whom I toured much of Spain.

At the end of "Murrieta" I had to do military service. Three months in the camp at Colmenar Viejo and another nine or ten in the upper general staff outbuildings on Vitrubio Street, that passed with greater sorrow than glory. At the time I was clear that I wanted to produce films and, given my previous experiences and the relationships I had made so far, I felt that my field of action was not only Spain, which I imagined small, but the world. He had been a regular reader of Variety, Hollywood Reporter and Cahiers du Cinéma for several years, as well as Frames and Film 7 days, then weekly magazines. My Bible was The Motion Picture Almanac, a guide to film people that is still being edited annually, and my favorite pastime was to see what new names were being incorporated year after year.

After about five years of activities, cinema had allowed me to meet many people, although most were foreigners or expats in Spain. One of them, Nicholas Wentworth, was a man my age who showed up at my house, with a recommendation from Bruce York, the day I was leaving for the military. He wanted to work in film in Spain, because in England, his country, trade unions closed the way to anyone who wanted to join. I remember Nick getting on top of a double-decker bus when we were going from Carabanchel to Atocha. During the journey, the end of which was the Military Government, I offered him to stay at my house, with my parents, my grandmother and my two sisters, and with the promise of recommending to some production manager who I knew. Nick wanted to work on "anything," though his hope was to be able to play an extra in some movies. The problem was that Nick didn't speak Spanish, so I recommended that he start by circling around without having to engage in big conversations. Manuel Pérez - a production manager and later active producer of films featuring Raphael, Julio Iglesias, Ana Belén - managed to get Nick into an advanced screening of Orson Welles's "Campanadas a medianoche". Three years later, Nick [Wentworth] would mount "White Comanche", my first film as a producer, and he has since had a long career in Italy, the United States and Spain. He is and will be an intermittent collaborator and always one of my best friends.