Who Are Those Guys? ~ Jack Cooper 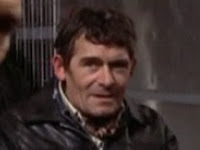 Jack Cooper was born in London, England in 1923. Although small in stature at 5 foot 9 inches and 170 pounds he was huge on bravery and guts. During his lifetime he was a bodybuilder and wrestler and was at one time a professional high diver which catapulted him into becoming a stuntman. He’s known for his falls such as his 75 foot dive in “The Crimson Pirate” (1952) followed with his 60 foot fall in “Exodus” (1960) and sixty foot fall out of a window in “Where Eagles Dare” (1968). He’s best remembered for a Jaguar XK-120 off a ferry bridge in Weymouth on “These Are The Damned” (1963) and for doubling Robert Shaw in the famous train compartment fight with Sean Connery in “From Russia With Love” (1963).

Cooper appeared in over 80 films but only one Euro-western “Custer of the West” (1967) as both an actor and stuntman. He is a member of the Stuntman’s Hall of Fame.

Jack Cooper died in 2010. Specific date and place are unknown.