Who Are Those Composers ~ Armando Sciascia 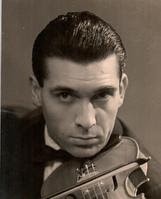 Armando Alberto Sciascia was born in Lanciano, Abruzzo, Italy on June 16, 1920.He was an Italian violinist, arranger, conductor, recording artist and composer, also known under the pseudonyms of H. Tical and Pantros. After graduating in composition and violin at the Pesaro Conservatory, he moved to Milan where he joined the orchestra of the Teatro Nuovo and that of the Pomeriggi Musicali; he then formed his own orchestra, with which he began to perform a series of instrumental pieces of his own composition together with international standards, and with which he performed throughout Europe.

In 1962 Armando Sciascia founded the Vedette record company, with which he will discover and enhance artists such as Equipe 84, Gian Pieretti and the Poobs, also signing some songs from the repertoire of these artists (also as a figurehead for those not yet registered with the SIAE), using the pseudonym H. Tical for the music and Pantros for the lyrics. At the end of the decade Sciascia decides to create two sub-labels, Albatros, specialized in folk music, and I Dischi Dello Zofiaco, taking on Antonio Virgilio Savona as artistic director, which gives the Zodiac the characteristics of a real popular-political series destined to later publish the records of the groups belonging to the current of the Nueva Cancion Chilena as Inri Illimani, Quilapayun, and Victoe Jara, as well as various other Italian and foreign groups and soloists.

In 1975 the name of the record company changed to Editoriale Sciascia, and in the following decade back to IMI In the mid-eighties Sciascia decided to retire, leaving the company to his son Sergio, who however prefers to conclude an agreement for the sale of the catalogs with Errebiesse.

Sciascia then moved to the U.S.A. and in 1988 founded a music company in Connecticut called the Preludium Music Company. Sciascia died in Trumbull, Connecticut on June 23, 2017