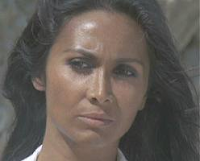 Il Mondo dei Doppiatori has reported that theater, film, TV voice actress and dubbing director Silvia Monelli passed away in Rome, Italy on January 27, 2021. She was 88. Born in Messine, Sicily, Italy on September 6, 1932 her acting career began in 1958 with an appearance as Commessa in the Italian TV mini-series ‘Valentina (Una ragazza che ha fretta)’. Silvia would go on to appear in over 20 films and TV series. She was better known as a dubbing director and voice actress. She directed several dozen films into Italian while adding or changing dialogue and occasionally voicing a role or two. She appeared as Stella in the 1971 Euro-western “Acquasanta Joe” (Holy Water Joe”), starring Richard Harrison and Ty Hardin.
Posted by Tom B. at 8:25 AM