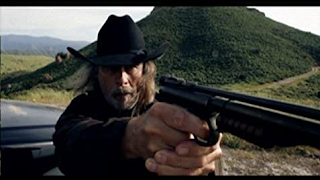 With humanity on the brink of extinction, a group of cowboys make humanities final stand against an invading force of aliens. In amidst the threat of total annihilation, a woman searches to find her missing daughter.

This film, which is not a rip-off of “Battle:LA” as the cover & initial plot concept (and even the trailer) would have you think (it was in fact conceived years before that film), it is in fact part of a trilogy of low budget sci-fi films. “Alien Armageddon” is a prequel to 2009's “Humanity's End”, both of which are set in the same fictional universe as 2007's “Nephilim” (the titular “Nephilim” feature prominently in “Humanity's End”) & 2006's “Battlespace”. While the budget is very low for the film, and the films visuals reflect that, it is infinitely better than just about anything released by The Asylum.