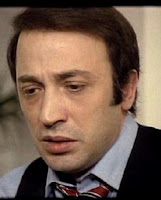 Ricardo Tundidor was born in Huesca, Spain on April 8, 1947 and was a magnificent theater, film, television and of course dubbing actor

A man of exquisite education and cordiality, he began his professional career very young.
He broke into dubbing in the early 1970s and soon left evidence of his undeniable quality. His early death in 1989 undoubtedly left us without his best performances.

Among many others he voiced José Ferrer in "The Shadow of the Pacific", Cristopher Plummer in "The Great Escape", Christopher Lee in "The Long Shadows", Martin Sheen in "Kennedy", Liam Neeson in "Excalibur" , Rock Hudson in "Dull Angels" and "Secret Mission", Sean Connery in "Murder on the Orient-Express". He intervened as an image actor in several films such as: "The mayor and politics", "Affectionately unfaithful", "The apolitical", "Blood stains in a new car", "A cabaret woman", "Extremadura touch "," Race law "," The dynamites "," 15 under the canvas "and so on.

His career ended at his sudden passing in Madrid in 1989.