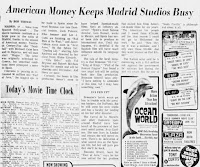 MADRID (AP) – News from Spanish Hollywood… The movie business continues at a brisk pace in the studios of Madrid, thanks to the infusion of American money. Twentieth Century-Fox shot “Deadfall” with Michael Caine here in Majorca, and will soon start “Magus.” The film was originally scheduled for Greece, but unsettled conditions there prompted a move to Spain.

Cinerama is pouring as estimated $4 million jata “East of Java” the biggest epic is he made in Spain since Samuel Bronston ran into financial troubles Jack Palance, Elke Sommer and Lee J. Cobb are finishing up “Bad Men of the West,” and James Coburn starts soon in “Avec Avec.” On the future list: “Darling Lilly,” starring Julie Andrews and directed by her close friend Blake Edwards.

“Villa Rides,” with Yul Brynner and Robert Mitchum begins this month and will be shooting until December. And there are more.

Curiously, the boom in film production doesn’t seem to have helped Spanish made films. Says and industry observer: “Spain’s most famous director, Luis Bunuel, works in Mexico, and Spain has never been able to produce an international star. Until that happens, it’s doubtful if the Spanish film will have much influence outside its language area”…

The talk of the local industry is that Bronston “El Cid,” “King of Kings,” “Fall of the Roman Empire” has found a new angel and will be getting back into film production Bronston himself says only. “I have something to announce at this time, but I may have something soon.”

Bronston’s lavish ways got him in trouble with his previous backers, the DuPont. But he still owns his own studio and has a facility for landing on his feet after disaster…

The Corral de la Moreria and other flamenco spots around Madrid have been bereft of the presence of their most noted patron, Ava Gardner. She now lives in London and swears she will never return. There’s no indication of what soured Ava on the Spanish life, but her odd pals predict she’ll be back.

Rosanno Brazzi, here for “East of Java,” says he has now solved the tax problem that exiled him from American made films for six years. “The American tax people said I owed them $750,000 and for that reason I could not go to Hollywood for work,” he said. “Now they say it was a mistake, and I only owe them $35,000. And they want interest on that $35,000.

That Italian actor said he is countering with a $3.5 million suit against the payment for salaries and during the past six years.