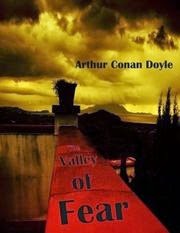 The story is framed around a criminal trial against the defendant's criminal organization the Dachsbracken later known as the Ku-Klux-Klan. Story sequences using retrospective follows the arrival of the main character Jack McMurdo into the valley, where the gang Dachsbracken and its membership in this organization live.

Mysterious Jack McMurdo slowly gains the trust of the gang bosses and also falls in love with Etie Shaffer - daughter of the owner of the boardinghouse where he was staying. Ettie, however unwillingly is betrothed to Teddy Baldwin, a member of the Dachsbracken, her marriage to him would absolve her father's debt. Ettie urges Jack to flee from the valley, but he refuses. To his fulfil his mission he needs more time. He finally manages to uncover the criminal gang. At the end, however, McMurdo is shot by Shaffer.

Thematically a strong television play about the beginnings of organized crime in the United States based on the story of Arthur Conan Doyle, “The Valley of Fear” is undoubtedly unique, not only treatment, but the main themes which the Czechoslovak Television does quite well and a myriad of Czech actors underlines the excellence of the production.