We continue our search for locations for “A Few Dollars for Django”. After Sheriff Regan is saved from a lynching by Smitty, the Mayor and the Judge Bransbury is arrested for threatening an officer of the law and put in jail. The scene then shifts showing a wagon carrying the Mayor, the Judge being escorted by Sheriff Regan and a posse riding out to the Norton ranch. An alternating scene shows Norton, riding alone, also returning to his ranch. Suddenly several shots are heard in the distance. Both parties stop to listen and then the posse rides on finding the stagecoach has been stopped and all aboard, including the federal judge have been killed. Trevor Norton’s rifle is found at the scene. Trevor is watching and listening from a distance as Regan tells the judge he’ll arrest him but that he may not be the guilty party. 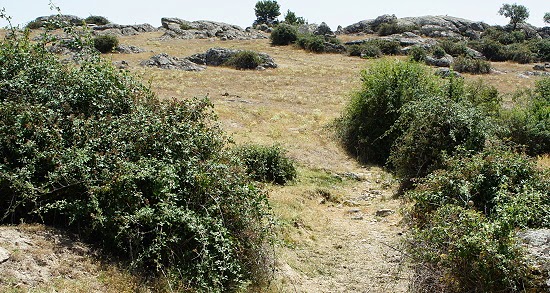