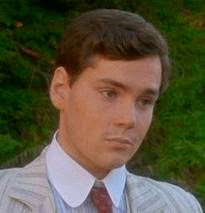 Canadian actor Jonathan Crombie, who played Gilbert Blythe in the Anne of Green Gables movies, has died at the age of 48. The son of Canadian politician and former mayor of Toronto David Crombie, died of a brain hemorrhage in New York City on April 15th. Crombie who was born in Toronto on October 12, 1966  appeared as a guest star playing Kevin Sims in an episode of the TV western series 'The Campbells' in 1990.
Posted by Tom B. at 12:59 PM