Doctor Who - The Gunfighters (TV) 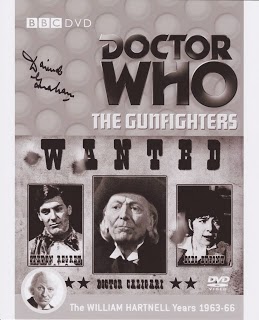 Doctor Who - The Gunfighters - British title 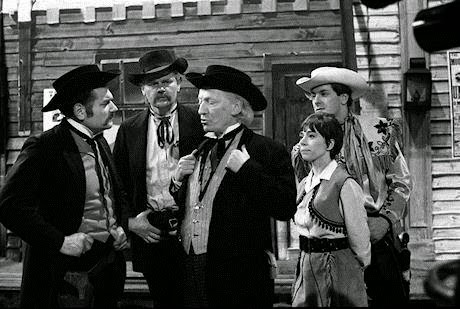 An eccentric yet compassionate extraterrestrial Time Lord zips through time and space to solve problems and battle injustice across the universe, traveling via the TARDIS (Time and Relative Dimensions in Space), which is his old and occasionally unreliable spaceship that resembles a blue police phone box (but changes its appearance depending on its surroundings) and is much, much larger inside than outside.

The Gunfighters is the seventh serial of the third season in the British science fiction television series Doctor Who, which was first broadcast in four weekly parts from 30 April to 21 May 1966. This serial was set in 19th Century America on the days leading up to the famous Gunfight at the O.K. Corral.

The shootout at the O.K. Corral is the scene of TARDIS’ next arrival. Steven is mistaken for a gunman, Dodo is kidnapped and the Doctor deputized by the sheriff. Episode 3.8 [episodes 1) A Holiday for the Doctor, 2) Don’t Shoot the Pianist, 3) Johnny Ringo, 4) The O.K. Corral].

Doctor Who is a British television science-fiction series, produced and screened by the British Broadcasting Corporation on their BBC 1 channel from 1963 to 1989 in its original form, with a new series launched in early 2005. In between the two, there was a one-off television movie co-produced with Universal Pictures and 20th Century Fox Television, screened on the Fox Network in the United States in 1996.