A German’s shattered romance with the West


Is the West the most misunderstood region in the United States?

It must have started when I was seven. In a black-and-white photo taken for “Fasnacht” — South German Mardi Gras — I’m sporting a cowboy hat and have a bandana around my neck. This showed my fellow Germans that I was strong and courageous, close friends with the Indians. Their faraway home in the American West was exciting and sometimes dangerous, but I was never afraid because the good guys always won.

Like every true German boy, I devoured Karl May’s novels about the Wild West: the tales of Winnetou, a virtuous Apache chief, and his Anglo-American blood brother, “Old Shatterhand.” As he was dying, Winnetou converted to Christianity, a twist that took the story too far for me. So I turned to the “Tecumseh” series by Fritz Steuben, the great-grandson of Baron Steuben, who helped train Washington’s troops at Valley Forge. I was taken by his detailed, vivid accounts of Native American life — and by the gruesome history of a war of extermination. I quit riding with the cowboys in my imagination and instead walked thousands of miles with the great Shawnee, determined to forge a confederacy of tribes to fight Anglo-American encroachment.

I kept reading as I grew older, and I watched Western movies, from Hollywood adventures to the disillusioned, tough Italian “spaghetti Westerns,” produced in Europe. Slowly, I realized that the romantic American West of my childhood might have nothing in common with the place itself.

Now, half a century and over a dozen trips later, I think the West is the most misunderstood and disrespected region in the United States.

I first saw the West with my own eyes in August of 1985. I was 28 and a Fulbright exchange student at Arizona State University.  As I flew from New York to Phoenix, I gazed in fascination at the changing landscape below. Like the settlers a century ago, I saw the green forests of the Midwest give way to prairie, then to vast, mountainous desert pockmarked with bunchgrass, shrubs and cacti. I could hardly contain my excitement.­

For the first months, I lived in my own personal Western movie: I was the star, a light-skinned Suebian dude who bushwhacked his way through the labyrinths of Arizona State University and — on weekends — explored the wild backcountry. I was stunned by the countless canyons and the rainbow-colored deserts, by the high wooded mountains and the friendly small towns. I had finally found my way to the Land of the Free.

The national parks became my favorite institution of higher learning, even better than the university. There was no better place to study Ancient Puebloan culture, for instance, than ­remote Keet Seel Ruin in northern Arizona, where I stood by a knee-high dungheap left by domesticated turkeys back in the 13th century.

But as the novelty passed, I began to see a more nuanced West. I learned that cowboys were once called “cowpokes” and that, far from being considered heroes, they stood at the bottom of a hierarchical society governed by dollar bills, of which they earned bitterly few. Indians were now Native Americans, yet they remained an often-overlooked minority who lived in what struck me as Third World islands within the U.S. — reservations plagued by poverty, alcoholism, domestic violence, disease and general disorientation.

Even the cityfolks in Phoenix seemed trapped in what a friend of mine called a “godless, soulless, cultureless” place. Some middle-class families spent  $400 a month on air conditioning and long hours every day stuck in automobiles. In the 1980s, the “Valley of the Sun” could have been one of the world’s centers for photovoltaic and thermo-solar energy. Instead, its electricity came from Palo Verde Nuclear Power Plant, then the world’s largest reactor complex. My own West Germany, a country smaller than Arizona, took the lead in developing alternative energies and making nuclear power obsolete.

Phoenix also lacked what Europeans treasure in their cities — a vibrant, attractive center. It had copied Los Angeles’ dysfunctional model of suburban sprawl, and its voters rejected every attempt to improve public transport. Some scholars trace modern suburbia to Jefferson’s early-19th century ideal of agrarian democracy — middle-class families living like small farmers­ on their own little allotments, each with a bungalow, two-car garage, lawn and pool. But after experiencing Phoenix, that theory seemed out of touch with the desert environment.

The city planners and architects had learned nothing from the cultures that had sustained themselves for centuries in this harsh and fragile land. And many Arizonans derided Arcosanti, Paolo Soleri’s architectural experiment in Paradise Valley, as a hangout for old hippies and slackers, though I thought it embodied one of the few viable visions for sustainability in the desert.

I left the West after my Fulbright ended, but returned about a dozen times as a reporter for German Public Radio and as a tourist. The more I saw, the more my feelings grew — both love and a bitter sense of disillusionment.

Nevada was a particularly brutal teacher. In late November 1991, I pulled off State Highway 447 in search of some peace and quiet. I had just witnessed a demonstration of highly sophisticated­ software at “Strike University,” a training facility for fighter pilots at Fallon Naval Air Station. The clean-cut airmen showed us how they could — simultaneously — track every move of up to three-dozen bombers and fighter planes, as they conducted mock assaults and air battles. It was unsettling; I lost a grandfather in World War II, and though I admired the smart young pilots, I couldn’t help thinking of the pain and suffering their missiles and bombs would inflict on the ground. Fallon is where fighter pilots trained for Operation Desert Storm, and I suspected it would produce more fighters for future wars.

After half an hour in the shade of a little cottonwood, I turned back onto the highway, only to stop again a few miles away, drawn by a historical marker near the Truckee River. The sign commemorated the Battle of Pyramid Lake, fought between volunteers, a U.S. Army detachment and a band of Paiute Indians, who were trying to cover their families’ retreat into the Black Rock Desert. I had never even heard of it. I took pictures of the marker and the battlefield without really knowing why.

Four years later, around Christmas, I was sitting with my stepfather at the long table of the Tyrolian mountain farm my family has rented for decades, when he asked out of the blue, “Does Pyramid Lake ring a bell for you?” He had found an old suitcase filled with letters from Karl, a long-forgotten great-grand-uncle who emigrated to the U.S. in 1847. Karl, a soldier, fought at the Second Battle of Pyramid Lake on June 2, 1860. He described it in a letter to his parents in Stuttgart: “I almost lost my life, because one bullet went through my hair right over my right ear without injuring me. I was so stunned at the moment, that I could not find a cartridge.”

Those letters reframed my relationship with the West. I can no longer blame “Americans” alone for the darker parts of the region’s history, because my own family’s history in the West goes back so much further than that of most residents today. Karl was a political prisoner during Germany’s Vormärz period, yet he fought Native Americans and helped to destroy their culture. He did this despite his love for the Native people. In a letter from Fortress Alcatraz, he explained why he re-enlisted with the U.S. Army: “City life was really against my grain and I longed to be back in the wilderness with the Indians.” 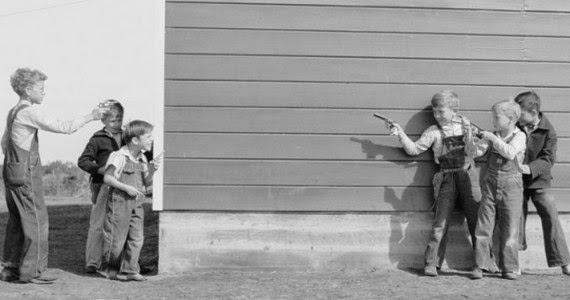 The West is full of contradictions, and I am one of them. Cowboy hats now make me suspicious, especially in cities. They are too often donned by people who hide their own economic and political agendas underneath the broad brims. I have little tolerance for the modern West’s aggressive stance against taxes and government and regulations, and its overuse of the mythology of rugged individualism. My heroes are the people who are striving to live sensibly and sustainably in the West, much as the one-armed explorer John Wesley Powell advocated 140 years ago. And I hope, and believe, that their number is growing.

On my desk at home in Germany sits a photo that keeps the West ever-present to me. It shows a colorful sunset from Grand Canyon’s Imperial Point, looking toward the Hopi lands; huge, lead-colored thunderheads loom in the distance.

The picture brings back hundreds of sweet memories: of Chicano friends in Arizona mining towns, of Native American friends at the university, of ranchers who welcomed me into their homes. It conjures up hikes and vistas and campsites where I encountered indescribable beauty. Around the equinox, the sun shines through my window directly onto the photo, and its light enlivens the colors so that the canyon seems on fire.

I’m not sure when I’ll visit again, but I know I will return. And when I do, I’ll discover new things that will shatter and rekindle my unquenchable romance with this extraordinary place.

Udo Zindel was born in Stuttgart, Germany. He has worked for Southwest German Public Radio Since 1987. He spent August 1993 as a visiting journalist with High Country News. Currently, he works as a gardener at a former monastery on River Neckar.