Who Are Those Guys? - Roscoe Born 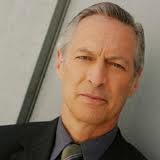 Born has appeared most often in daytime television, first appearing on ‘Ryan's Hope’ as troubled mob heir Joe Novak from 1981 to 1983 and again in 1988. He next portrayed villain Mitch Laurence on ‘One Life to Live’ from 1985 to 1987 then again from 2002 to 2003, reprising the role once again starting in November 2009. Born appeared on ‘Santa Barbara’ in his best known roles Robert Barr (1989–1991) and his twin Quinn Armitage (1990–1991), a role that earned him an Emmy Award-nomination. He was also a regular on the primetime soap ‘Paper Dolls’ as Mark Bailey in 1984. From April 2005 to January 2006 and again in March 2009, Born was on ‘The Young and the Restless’ in the critically acclaimed role of the evil Tom Fisher. Many of his daytime roles showcased him in evil roles, with the exception of Nick Rivers on the 1995-1997 ABC series ‘The City’. Nick was a grizzled musician, allowing Born the opportunity to perform his own material. He can be seen performing some of his more recent songs on YouTube.com: "Bob Dylan's Pepsi Blues"; "Blue State Mind, Red State Soul"; "Soldier On", a salute to our troops in Iraq and Afghanistan; and "If It Don't Stink, Don't Stir the Pot", a response to the Boy Scouts of America sex abuse scandal.

In the 1980s, he also guest starred in such prime time shows as ‘Murder’, She Wrote’ and ‘Midnight Caller’ and starred in the TV movies ‘The Haunting of Sarah Hardy’ and ‘Lady Mobster’. In 1989, he had a featured role in the cult-classic Independent Euro-western Film ‘Pow Wow Highway’. 1970s TV appearances include ‘The Incredible Hulk’, ‘Six Million Dollar Man’, two episodes of ‘The Rockford Files’ and the TV movie ‘Fast Friends’.

Around this time Born played the dastardly Jim Thomasen on ‘All My Children’. In late 1997, he abruptly left the role and did not appear on daytime for the next several years (save bit parts on ‘As the World Turns’ and ‘Guiding Light’). Born was working outside of the industry when ‘One Life to Live’ rehired him from 2002 to 2003 to reprise the role of Mitch. Born portrayed an evil prison warden on ‘Passions’ in 2007, and played the contract role of Dean Trent Robbins on the NBC soap opera ‘Days of Our Lives’ from May 29, 2008 to September 26, 2008.

Over the last thirty years he has worked in Regional Theatre on both coasts, and Off Broadway and Off-Off-Broadway in New York.