Most, if not all attempts at bringing non-Spaghetti Euro-Westerns to a U.S. audience have failed. Blueberry is long out of print, and although there is a small press called NEMSI dedicated to publishing Karl May’s work in English — it is very much a niche affair. Recently however the Los Angeles-based wing of French publisher Humanoids attempted to bring another example of the genre to American shores. Like Lucky Luke or Blueberry, Bouncer: The One-Armed Gunslinger is a comic strip, but one written by the legendary underground film director Alejandro Jodorowsky.

Since his planned movie adaptation of “Dune” was aborted in the late 1970s, most of Jodorowsky’s formidable creative energy has been poured into cartoon strips, where his preoccupations with sex, violence, spirituality, and physical deformity rampage as gleefully on the page as they once did on the screen — which is why anybody looking for a typical Jodorowsky head trip may find Bouncer: The One Armed Gunslinger startling for its restraint. The relatively realistic tone is set by artist François Boucq, whose depictions of the Western landscape are stunning. The setup is classical –- in the town of Barrio City somebody is assassinating figures of authority via the bite of a poisonous snake. There is an evil land baron, a corrupt sheriff, and there are whores, saloons, and squabbles over territory, etc. 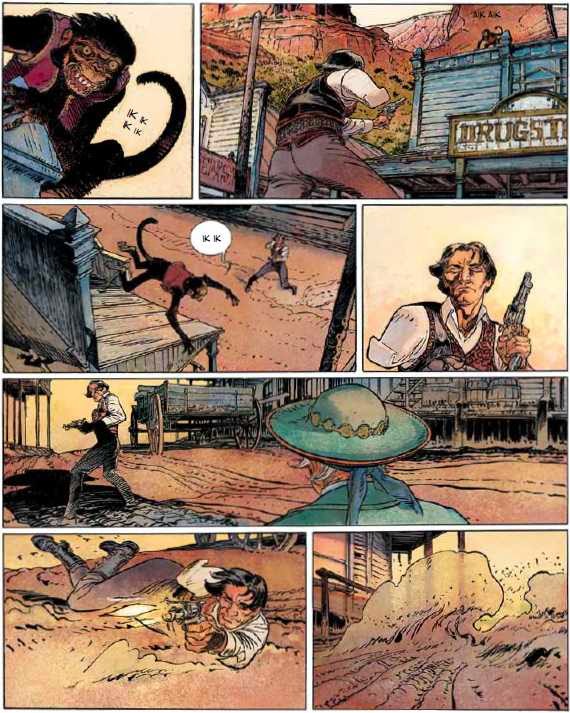 The strangest thing in Bouncer is the titular protagonist — a dense, bizarre distillation of Western anti-hero tropes. Drunken, illiterate, the one-armed son of a whore, he is nevertheless nearly as quick and accurate on the draw as Lucky Luke. Bouncer moves in a world of exaggerated violence and evil much darker than that of conventional Westerns. Jodorowsky subjects his hero to constant degradation, humiliation, and cruelty — as the town’s hangman he is forced to execute the love of his life and her husband. Later, bodies are fed to pigs in a scene that recalls the almost equally cynical HBO series ‘Deadwood’. But Bouncer is much more tightly plotted than that brilliant/turgid TV show. There is a spectacular scene featuring three Mexican assassins and a devilish monkey. The masterful silent choreography is a vivid reminder that Jodorowsky is the only trained mime ever to write a Western.

Towards the end, Jodorowsky’s characteristic spiritual concerns emerge in full force, and the book departs radically from the tone of most, if not all, American Westerns. Jodorowsky is promiscuous with symbols; he never tells straight allegories, but rather spins genre stories saturated with imagery that can be interpreted in different ways. Thus as the assassinations of Barrio City’s notables mount, Jodorowsky seems to be mounting an almost Sadean assault on earthly authority. His heroes are all deformed or mutilated physically and spiritually, but striving towards a goal higher than the accumulation of power and wealth. Finally the assassin reveals himself to Bouncer and the solution to the mystery transforms the hero’s understanding of everything; he learns his true identity and discovers a mystical destiny simultaneously. Cormac McCarthy may have excelled at the existentialist Western, but here Jodorowsky seems to have invented the Gnostic Western — all the while observing genre conventions and reveling in vulgarity and violence.

Is this “authentic” though? Will it make sense to an American readership? Well it’s worth remembering that, unlike most purveyors of the Euro-Western, Jodorowsky is himself American, albeit of the Chilean, Spanish-speaking variety, and he grew up in the 1930s and ’40s in a world as rough-hewn as any depicted in the movies. Thus, while it’s probably safe to ignore the works of Karl May and the fantasies of Germans in teepees who reject actual Native Americans as unauthentic, when Jodorowsky expands the Western into new territory, perhaps North Americans should sit up and take notice. The world of Bouncer may be strange and dark, but it’s the real thing.