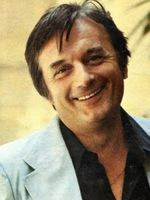 Dominique Paturel is a French actor, born on April 3, 1931 in Le Havre, Seine-Maritime, France.
He is the son of Joseph Paturel, Director of Family Allowances and Anne-Marie Le Minihy of Villehervé. After studying at Saint-Joseph College in Le Havre, he entered the National Center of the show on rue Blanche in Paris.

In the 1960s and 1970s, Dominique Paturel, was one of the stars of French television, where he performed in the framework of the Theater of the youth, and in popular soap operas, like ‘Lagardère’, and in the show ‘Au théâtre ce soir’.

Paturel is also one of the big names in dubbing in France: he has lent his voice to Terence Hill, Michael Caine, George Peppard (Hannibal Smith ‘The A-Team’), Robert Wagner (Jonathan Hart in ‘Hart to Hart’) and Larry Hagman (JR in ‘Dallas’). He was also the voice of Roy Thinnes (David Vincent in ‘The Invaders’).