We continue our search for film locations for “The Relentless Four”. Sam talks to the sheriff and asks if he talked with the boy who helped him escape. The sheriff tells Sam the boy swears it was not him who shot the rifle and Sam confirms it telling the Sheriff he knows who it was.

This scene was film at the at the western town set Poblado Lega y Michelena, Colmenar Viejo, Spain. 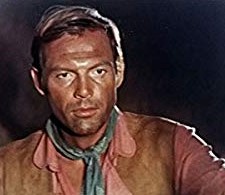