Who Are Those Composers ~ Daniel Montorio 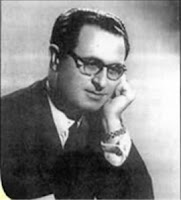 Daniel Montorio Fajó was born in Huesca, Aragon, Spain on January 4, 1904. Daniel had a hard childhood, full of misfortunes, as he came from a very poor family with five children to support and few resources. Daniel's father played guitar in Sertoriana Rondalla and it is believed it is here that Daniel started his musical vocation, although studies were few and far between because of the limited income of the house. Don Alejandro Crowns, a great professional musician, gave him his first lessons in music theory, which followed the piano, from which he studied various applications. Upon the death of his teacher, Mariano he continued his studies until his father died when he was fourteen in 1918.

As the eldest brother, Daniel must deal with the needs of the house, for several hard years. Thanks to the help and protection of Ramon Mayor, Daniel gets a Huesca Provincial pension of one hundred twenty five pesetas monthly for a year, to broaden his musical studies. When he was eighteen, he wesnt to Madrid and studied at the Royal Conservatory of Music. Here he received first place prizes in piano and harmony. He competed and won a position in the Alabarderos Band in 1928.

Little by little he revealed in various performance pieces, which added to a fruitful career as a composer, along with a life entirely devoted to his art. He composed ninety-five plays and composed music for over one hundred films. Among the plays should be noted “Una rubia peligrosa”, “Las noches de Montecarlo”, “Vampiresas 1940”, “Tabú”, “Una mujer imposible”, “Tentación”, “El conde de Manzanares” and “Luces de Madrid” among many others.

As a musician and film composer, Daniel Montorio was a remarkable figure, both for the variety of his compositions and for the importance of the films on which he worked. He participated in the silent films synced some Spanish films, but it was in the sound era (in Spanish cinema of the 1930s), that his greatest activity prevailed. He had an easy and brilliant melody, song lyrics that were added to black and white sound versions of silent films. He also composed the music for descriptive “Fermín Galán”, one of the first Spanish films of the 1930s. For Jean Grémillon Dolorosa, he made the adjustment and the addition of background music which led to great success. Personal and bright is the score for “El negro que tenía el alma blancaa!” (Benito Perojo). He also worked with Luis Buñuel between 1935-1936. He scored three Euro-westerns during his career “Dirty Gold” (1941), “Relevo para un pistolero” and “Shoot to Kill” both 1963.