'Sordo' and 'The Sisters Brothers', winners of the 9th edition of Almería Western Film Festival The Festival awarded the 'Tabernas Desert' award to the producer Fresco Film Services for its contribution to the dissemination of the Desert environment as a cinematographic icon
Tabernas, October 13, 2019.- 'Sordo' and 'The Sisters Brothers' have been the big winners of the ninth edition of Almería Western Film Festival. Thus, the jury decided, which rated both films as the best in the Western categories, as well as best female and male interpretation, respectively. In addition, in other categories, 'Deadwood: The Movie', 'Big Hell' and 'Big Kill' have been awarded.

Prize for the Technical-Artistic Contribution to the Western Genre: Nichole Beattie, Regina Corrado and Mark Tobey, the production team of Daniel Minahan's 'Deadwood: The Movie' (USA, 2019).

The director of 'Sordo', Alfonso Cortés-Cavanillas collected the award for best new western, together with the actors of the film Jaime Martin and Marian Álvarez, who embodies in this feature the leading role for which she has received the award for best female interpretation

Best for Best Film School Practice: 'The Voice of The West' , by Alejandro Bastidas (Mexico, 2018). 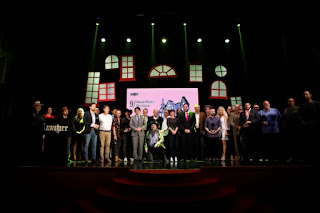