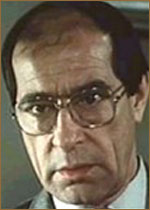 German director, theater, film actor Gerd Staiger died in Schwerin, Mecklenburg-Vorpommern, Germany on June 19, 2019. Born in Germany
on November 30, 1930 he was mainly engaged at the Hans Otto Theater in Potsdam as an actor and director. Other tasks he had at the 1978 newly founded Potsdam Cabaret Obelisk, where he directed the opening program. In 1993 he worked as an actor in Shakespeare's Coriolan at the Salzburg Festival. He had over 65 film and TV roles and appeared in several DEFA and TV films among which were four Euro-westerns; as a watchman in “The Falcon’s Trail”; a bandit in “White Wolves” (1969); the Alcalde in televisions “Prairie Scout in Mexico” (1987); and a role in TV’s “Karl May”(1992). Gerd was married to the architect Kerstin Döring.