Once Upon a Time in Deadwood - Review 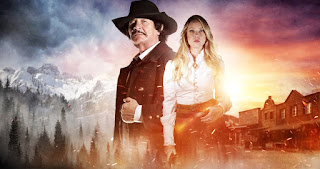 Robert Bronzi Returns in ‘Once Upon a Time in Deadwood’

In Once Upon a Time in Deadwood, The Colonel (Robert Bronzi) is a hardened former soldier who has taken to traveling the wild west on his own. He’s as tough as they come and marches to the beat of his own drummer. Ursula (Karin Brauns) is an heiress with money to spare and she needs help quick. Her sister and house servant have been kidnapped by the notorious Swearengen (Michael Pare) who has sinister plans for the two.

Ursula tracks down The Colonel to ask for help. He refuses to help but accepts the meal she has offered him. After he eats, she informs him that he’s ingested a poison that will kill him in a few days and the only person who has the antidote is her sister. He’s forced to take to the trails with Ursula and try to save the girls. It won’t be an easy trip, people with villainous intentions are lurking around every tree, waiting to rob them of their possessions and dignity. It will be a dangerous trip with time being of the essence, if he makes a single mistake and falls behind, it could cost him his life.

I’m absolutely fascinated with Robert Bronzi. Not since the 1970’s when there were countless Bruce Lee imitators has someone come along and has received so much attention. The main difference in Bronzi’s case is the fact the resemblance to Charles Bronson is so uncanny. It’s almost jarring at times when he speaks and Bronson’s voice isn’t coming out of his mouth. Also, at least to me, while he looks like Bronson, the more he appears on screen, the more he appears to be developing his own onscreen persona. That’s why I’m really excited to see the next pairing of Bronzi with filmmaker Rene Perez, Cry Havoc.

Once Upon a Time in Deadwood is the third project for the duo and is as equally fun as the previous two From Hell to the Wild West and Death Kiss (check out my review of this one here). Perez directs with confidence and has a flare for making things look much grander than they may be. I’m sure the film was made quickly and on a tight budget but he’s been doing it long enough now he knows how to squeeze every penny out of that budget and turn it into gold.

Bronzi’s co-star Karin Brauns is something special as well. She has worked with Perez and Bronzi before and the chemistry translates to the screen. There’s something really special about her and her performance. There are moments in the film where she delivers a couple of monologues and while I was concentrating on her words, I found myself drawn to her eyes and the sincerity in them. It was very odd for me but at the same time it made me realize just how committed she is to her craft. It was also a treat to see the legendary Michael Pare appear as the films villain. He’s one of my all-time favorites and every time he appears in a film it’s a treat to his fans.

OUATID is a traditional western in every sense of the word. While the story isn’t groundbreaking, it works and holds your attention. There’s plenty of action in between story beats and I was happy to see Perez didn’t go light on the red stuff. Perez also knows the importance of music in a low budget feature. The Darkest Machines (Perez) delivers a score that sounds like a traditional western score with hints of a modern rock sound. It has a huge sound and helps to give the film some extra value.

With each film he puts out, it becomes more and more apparent just how much he enjoys making low budget genre pictures. It’s almost like he’s challenging himself with each film and in doing so, he’s becoming a stronger filmmaker. Make no mistake, he’s making B-movies, but for people like myself, they’re what helped to mold my love for film. OUATID is nothing but a real good time and a perfect way to keep youself entertained.

Once Upon a Time in Deadwood 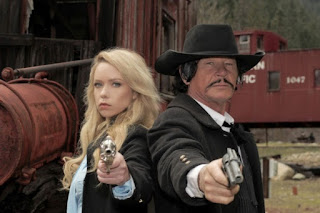 A notorious gunslinger is slipped a slow-acting poison by an heiress and told he has three days to track down and rescue her sister, who has been kidnapped by a gang of hoodlums and holds the antidote.