We continue our search for film locations for “The Relentless Four”.  Sam and the wagon are driven to the hanging tree and a noose is put around his neck by the sheriff. The preacher tells Sam he’ll rest in peace if he confesses but Sam says he’s innocent. The wagon is moved way and Sam is left hanging from the tree. The sheriff then takes him down and places his body in the wagon. He goes to Mrs. Aders and gives her a large sum of money which he says was found in Garrett’s saddle bags. Lobo sees the transaction and is bewildered. 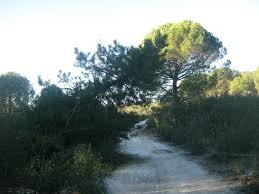