Voices of the Spaghetti Western ~ What Am I Doing in the Middle of a Revolution? 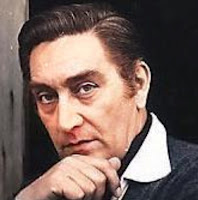 Arturo Dominici was born in Palermo, Italy on January 2, 1918 and became best known for his many villainous roles in horror and fantasy films. He is best remembered for his performance as the monstrous Igor Javuto in Mario Bava's “Black Sunday” (1960) and the evil Eurysteus in the 1958 Steve Reeves epic “Hercules”. His filmography includes more than 80 titles, including Antonio Margheriti's “Castle of Blood” (1964), in which he appeared with “Black Sunday” star Barbara Steele. Dominici was also a film dubber on many films including the the voice of Austrian actor Walter Ladengast in the Italian release version of Werner Herzog's Nosferatu the “Vampyre” (1979). Arturo was married to actress Irene Quattrini and their daughter, Germana, is an Italian stage actress; at the age of 14 she had a small role as a farm girl in “Black Sunday”. His granddaughter Federica Bomba [1975- ], is also a dubber. Arturo Dominici died of cancer on September 7, 1992 in Rome, Italy.