We continue our search for film locations for “The Relentless Four”. Sam is tied and dragged behind two horses back to town. Lobo turns Garrett over to the sheriff and tells him he killed his three friends. After Sam is placed in his jail cell Deputy Vince confronts Lobo about not having to share the reward and he’s told he’ll get his share. 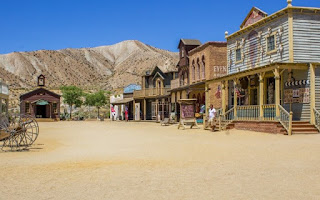 For a more detailed view of this site and other Spaghetti Western locations please visit my friend Yoshi Yasuda’s location site: http://y-yasuda.net/film-location.htm and Captain Douglas Film Locations http://www.western-locations-spain.com/
Posted by Tom B. at 8:07 AM