Two sections of this railway lay south of Hernan Valle, are used for the sequence of the film "7 Guns for the MacGregors" (1965) in which the brothers make fun of the Mexican bandits managing to thwart a train robbery: the Rambla area del Agua (with the Sierra de Gor-Baza in the background) and the bridge of Grao (about eight kilometers northeast of Guadix), used a steam locomotive and three old carriages which were rented from RENFE, the railway network of the Spanish national team. A stretch of this railway runs through the country of Hernan Valle and here were shot the sequence of "Once Upon a Time in the West" (1968), in which Frank (Henry Fonda) finds Morton's train (Gabriele Ferzetti) stopped on the plains, full of corpses. Presso del Grao bridge is where a filmed sequence of "Duck You Sucker" (1971) in which Sean Mallory (James Coburn), Juan Miranda (Rod Steiger) and his band ride along the railway towards the city of Mesa Verde. The Gior station, located a few kilometers to the east. and used as a set for the sequence in which the revolutionaries, by putting a truck on the tracks, block and attack the train on which the fleeing governor was riding and on which the protagonists are also hidden, Rod Steiger and James Coburn. In the area of Hernan Valle were shot scenes of the railroad of "Navajo Joe" (1966); "John the Bastard" (1967); "The Hunting Party" (1971); "Red Sun" (1971) and "Whiskey and Fantasy" (1974). 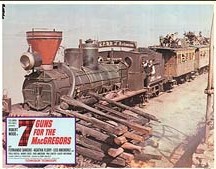