Nieves Navarro, the "Emmanuelle" of Almería that happened to be called Susan Scott 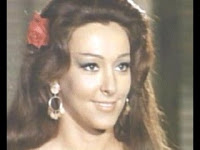 Nieves Navarro came out in a late sequel to Emmanuelle, but her resume is full of surprises.

Nieves Navarro García was born in Almería in 1938. At twelve she left with her family in search of work in Barcelona, ​​where she has lived in recent years with her late husband. She stood out as a model and announcing on television the "commercial spot" of a well-known brand of brandy. In the 1960s there was none other than the so-called First Chain, in black and white and anyone who came out in which someone called "the silly box" immediately reached an immediate impact. The viewing could then be seen by more than ten million viewers. That's why a Catalan producer, Balcázar, hired her for her film debut in 1964, “Toto de Arabia”, that was filmed with Nieves in Tabernas, in the first of many films that were made in that land, the Almeria desert. Toto was a very popular Italian comedian in his country, although already old and about to go blind, as she remembered, while adding also a distinguished gentleman; I think he had a noble title. Later, Nieves Navarro continued in her hometown, at the time of the so-called "Spaghetti western", Spanish versions of the American West movies, taking advantage of the landscapes of the province of Almeria. Of that filmography there are esteemed titles where she took part, like “A Pistol for Ringo”, by Duccio Tessari, although in that genre women had less prominent roles.

Nieves Navarro had met an Italian director and producer in Almeria, whom she fell in love with: Luciano Ercoli. The wedding took place, according to her testimony in 1967, although on Wikipedia and other sources and encyclopedias it was cited in 1972. The fact is that they joined in marriage and she also participated in films of her husband. She returned from Rome, where the couple had settled, to shoot in 1968 at the orders of the prolific Ramón Torrado “Amor a todo gas”, next to the gypsy Peret, where she also became known as a singer. Let's say it was the best known film by Nieves Navarro, in Spain.

From 1969 the director Fernando di Leo recommended that she change her name, if she aspired to be an international star. She did not get it, but of course already based in Italian cinema she became a very sought-after actress first in films that in that country belong to the genre "giallo", a word that comes to be that of the yellow color, used in that cinematographic designation because it was used in the 1930s and 1940s in popular detective novels. Then, she also combined the so-called Susan Scott with films of high erotic content, where the most honored there was Edwige Fenech, a friend of Almeria. She recognized that she did not like to undress before the cameras, much less pretend orgasms and scenes of supposed passionate love on the bed. But I had to "fill the fridge." And so it lasted a few years, because we have to recognize that she had a spectacular body. From brunette, she changed to blonde many times to be more exciting.

All this lasted until 1989, when she shot her last work that already with the title is unnecessary to specify the argument: “Casa de placer” (House of pleasure). She agreed with her husband and they chose to move to Barcelona, ​​the capital that as we said at the beginning brought Nieves good memories. And there he was widowed in 2015, and has withdrawn from all previous activity.