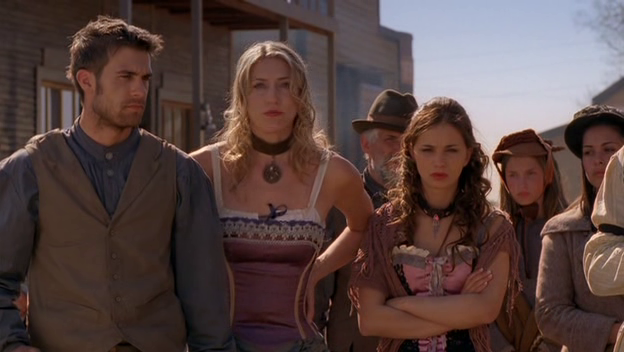 “Wild” Bill Longley rides into town talking about settling a score with an outlaw Jesse Evans. He also brings with him a warning that this tiny community is in the path of an approaching swarm of killer snakes that have been cutting a swath of death across the desert. Evans and his gang hold “Wild” Bill at gunpoint in the town’s saloon. The unconvinced outlaw makes a deal that if the snakes arrive by high noon he’ll let “Wild” Bill ride out of town; otherwise, they’re going to settle things with a high noon gunfight.

Evans exits the film a third of the way through and not in a way you’d expect his character to depart the film. From then on, once the snakes arrive, what had played like a fairly straight forward western develops a campy Tremors riff with “Wild” Bill and a small ragtag contingent of townsfolk including the sheriff, some local businessmen, harlots, gunslingers, and a couple of leftover outlaws having to make a stand against the slithering horde. This will involve dynamite, Civil War era flamethrowers, and a Gatling gun that fires so pitifully slow they’d have been better off sticking with handguns. And because this is a Sci-Fi Channel snake movie you just know there has to be a really big one lurking about somewhere.

“Copperhead” was a made for television western filmed in Bulgaria by director Todor Chapkanov it starred American actors Brad Johnson and Billy Drago, Wendy Carter. The balance of the remaining actors were East European. Bulgaria and Romania have become the new European countries for filming westerns because of its cheap labor pool and production costs.
YouTube trailer: https://www.youtube.com/watch?v=_ugGm0ZUVp8
Posted by Tom B. at 7:28 AM