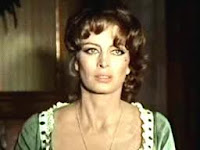 Germaine Hélène Irène Lefebvre was born on January 6, 1928 in Saint Raphaël, Var, France. Taking the name Capucine she became a French fashion model working for Givenchy and Christian Dior. She made her film debut in “Rendez-vous de Juillet” (1949). On the set, she met Pierre Trabaud [1922-2005]; they married the next year but the marriage lasted only eight months, and Capucine never married again. As an actress she’s best known for her comedic roles in “The Pink Panther” (1963) and “What's New Pussycat?” (1965). Capucine appeared in 36 films and 17 television productions between 1948 and 1990 among which was on Euro-western “Red Sun” as Pepita with Charles Bronson, Toshiro Mifune and Alain Delon. On March 17, 1990, Capucine jumped from her eighth-floor apartment in Lausanne, Switzerland, where she had lived for 28 years, having reportedly suffered from illness and depression for some time. Today we remember Capucine on what would have been her 85th birthday.