THE PROUD AND THE DAMNED 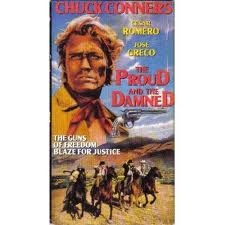 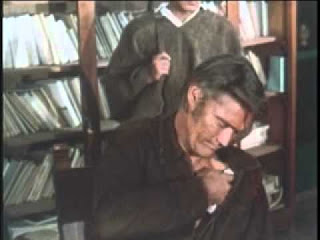 In 1870 Ex-Confederate mercenaries and American Civil War veterans Sgt. Will Hansen, Ike, Hank, Jeb, and Billy have emigrated from Texas to South America. After their arrival, they are confronted by South American soldiers who ambush them and force them to come with them to meet General Martinez, the evil, cold-hearted dictator of their country. When they meet Martinez, he gives them a job: to go visit San Carlos, a town where rebel forces are preparing to start a Civil War between them and Martinez’s army, live amongst the rebels, and report back to him what they know within the next few days. Will and his men take the job, but Martinez warns them that they'll be severely punished if they fail him.

The next day, while on their way to San Carlos, Will's gang runs into a gypsy family who are on their way to the same town. Will escorts them and the gypsie's daughter, Mila. They both haven fallen in love with each other at first sight. They all ride into San Carlos, meet the governor, and rent a cabin outside of town. Will and Mila sneak out that night and meet. Mila’s father is angry when he hears of this and slices her cheek. When Will finds out about what Mila's father has done to her, he shoots and kills him in cold blood.

Will and his gang decide to disobey Martinez's orders and do not to report back to him. As promised Martinez kidnaps and hangs Will for their failure to obey his orders. Will's companions find him and give him a funeral. They vow to avenge their friend's murder. They join the rebels in a battle with Martinez's army and drive them back. They later ambush Martinez and the rest of his surviving soldiers in a canyon, joined by the rebel army's captain. They manage to kill Martinez, but all are gunned down by his soldiers, accept for Billy, who was unconscious after falling from his horse. Billy recovers and rides off into the sunset.