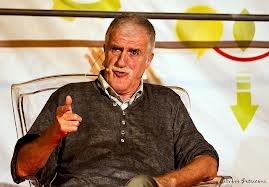 Ugo Fangareggi was born in Genoa, Liguria, Italy on January 30, 1928. He has appeared in over 80 films as a character actor using his real name and also aliases such as Fangar Hugh-Smith, Ugo Mudd, and William Spofford. Fangareggi has appeared in over 80 films and TV series. Among which were seven Euro-westerns including “The Last Gun” (1964) with Cameron Mitchell, “A Bullet for a Stranger” (1971) and “Massacre at Fort Holman” (1972) with James Coburn and Telly Savalas.

In the late 1990s he wrote articles for the newspaper Mondo Sabino.

One his best remembered roles was as Vetturino in “Cugino & Cugino” (2010). In 2007, he also worked with Fabrizio Bentivoglio appearing in the film “Lascia perdere, Johnny!” where he played the part of Peter Tagnin. He starred in the 2010 TV miniseries for BBC ONE ‘The Lord of the Scam’ with Gigi Proietti in the role of Osvaldo Franzoso, the caretaker of the building.