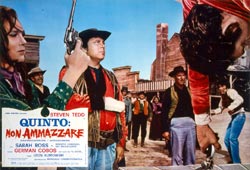 Disguised as lepers, Blake and his band (Albert, John, Sucre, Vincent, Navajo and Kate) steal half a million dollars in a bank, killing all the employees. During an avid pursuit by the inhabitants of the town, Vincent, is hit, falls to the ground and is captured and hanged. Subsequently, the citizens welcomed the proposal of a stranger who agrees, in exchange for ten thousand dollars, to recover the money which has been robbed and exterminate the bandits. In the meantime the, reaching their hideout, realize that the loot is gone. In order to discover the thief they move to an inn in the desert, where they become the masters forcing a shy young man, Bill, unable to hold a gun, to be their servant. The gang begins to suspect each other of having stolen the five hundred thousand dollars. The bandits begin to eliminate each other: Kate kills to defend John, Albert is murdered by Navajo who leaves the band with a woman. Meanwhile, Sucre, a former colonel, gravely ill with tuberculosis, and Vincent's brother, convinces Bill to learn how to use a gun. Sucre knows the Blake sacrificed Vincent to cover his escape. Now is the time for revenge, for the former colonel, who is the man who has promised to recover the stolen money. He faces Blake and during his fight with the bandit, the bank notes are discovered hidden in a chair. Feeling betrayed, Kate tries to kill Blake, but is then shot to death. Conscious of being near the end, for his illness, Sucre forces Bill to kill him, but not before making him promise to return the money to the bank and bury Vincent in Mexico.