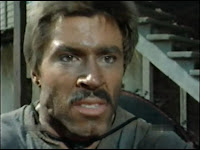 Constantine Daniel Vafiadis was born in Shanghai, China, on January 3, 1938. He got his break in show business performing in the Mae West Revue using the stage name Dan Vadis. He was featured in West's famous bodybuilder troupe in the mid-1950s, along with Gordon Mitchell, Mickey Hargitay, and Reg Lewis. Vadis would have to wait six years before taking on his first film role, in the 1962 classic “Colossus of the Arena” with Mark Forest. His friend Gordon Mitchell brought him to Italy to take advantage of the Italian sword and sandal fad. After making a number of Italian peplum films Vadis moved into the Spaghetti genre where he appeared in seven Euro-westerns including “Deguello” (1965), “Fort Yuma Gold” (1966) and “The Stranger Returns” (1967). He returned to the U.S. and continued his film career in the 1970s, appearing in a number of Clint Eastwood's most popular films, such as “High Plains Drifter” (1972), “The Gauntlet” (1977), and “Bronco Billy” (1980). Sadly, Vadis died on June 11, 1987 in Lancaster, California, at the age of 49 from a drug overdose. He was survived by his wife, Sharon, whom he married in 1980, and a son Nick. Today we remember Dan Vadis on what would have been his 75th birthday.