In the second half of the 1960s appeared the film Django in Europe, its director, the Italian Sergio Corbucci, nor any of the crew, were skeptical about their chances. They were aware of having made a low-budget western very atypical, even betraying some genre conventions. For example, the protagonist, played by the then unknown Franco Nero, did not burst onto the screen riding a flaming horse but was shown walking, dragging through the mud a heavy coffin. Go look! Then, appeared the ingredients of the film ghostly, hooded villains, Mexican revolutionaries, cemeteries and, above all, a lot of violence. So that in some European countries it took years to debut in others some sequences were cut. Django quickly became a phenomenon that triggered the popularity of European western. Such was its success that even many retailers (especially Germans), introduced the name of Django in the title of any western that came to their theaters, even though the film did not have anything at all to do with the character created by Corbucci. The figure of this "angel of death", which runs through the prairies imparting divine justice, became an icon, that influenced several generations of filmmakers like Clint Eastwood, Quentin Tarantino and Takashi Mike.

Django and the angels of death of western Europe is a work that examines the success of this character and tries to put some order in his extensive filmography, full of unofficial sequels, copies and bizarre impersonations. It also pays tribute to other "angels" that appeared in the wake of the success of Django and who also became very popular. Among them, were Sartana and Sabata, especially thanks to the memorable performances of Gianni Garko and Lee Van Cleef. A tribute to a stream of European westerns with the passage of time are still adding fans to the genre. 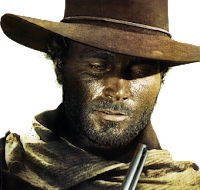 The first book I did on the world of film was dedicated to Sergio Leone. Therefore it was difficult to hide my love for the European western, either named, spaghetti western, sausage western sausage, western all'italiana, in Europe, to the Mediterranean or Spanish. In those blessed years I caught on that there was a genuine local cinema theater, and it became for me one of the greatest pleasures that one could enjoy, A European western combined with a peplum, a swashbuckler movie, an adventure film or a Tarzan movie. What glorious afternoons! Just as you went in the auditorium after you had eaten dinner and saw a film which was followed by a Zorro, or Django. What more could you ask of life! Well, as you can see in these lines, I was a little overcome by this type of production and, even today, although it has rained a lot since then, I remember them with fondness. 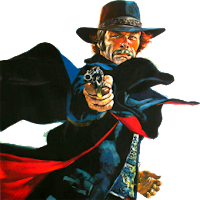 Hence, for some time, I had thought about the idea of ​​writing something about the European Western. Believe it or not, the subject is vast and complex. Not in a general approach, I wanted to make my first approach on a specific topic. My first idea was to gather the greatest heroes of the genre. For there already had appeared Django, Sartana and Sabata, along with other gunmen as Ringo, Trinidad or the insurmountable "Man with No Name" played by Clint Eastwood in the dollar trilogy of Sergio Leone. But the project was still too ambitious. So I wanted to give this kind of righteous avenger a divine halo baptized with the name "angel of death" and that the figure was the main reason behind Django. Django was born of the angels of death of the European western. The project allowed me to reconnect with a series of characters who had fascinated me for years. And I was amused to see that what progressed in parallel was the production of a new Django, this time made ​​by Quentin Tarantino Django Unchained. 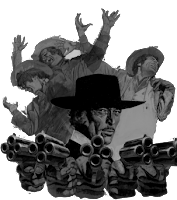 Django and the angels of death of the European western is not intended to claim anything. It is just a memory, a tribute to a type of film that will go down in history, but today it still surprises for its impudence, for creativity and for its constant challenges imposed by the Hollywood conventions.