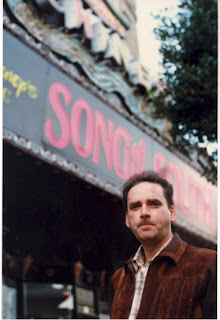 He was a part of Westerns…All’Italiana! from the moment it was conceived. I called my friend Gary Dorst in early 1983 and shared the idea of a fanzine devoted to Italian westerns. He loved it, of course. That’s why I called him; I needed a cheering section. And by April of that year the first edition – all 50 copies! – had been written, assembled and printed. So I assigned Gary as the co-editor and he stayed in that post through WAI! double issue #3 & 4. It was but a small part of our broader friendship that lasted 35 years. Gary’s love for Italian westerns, soundtracks, monster movies, autographs, art and on and on were in perfect sync with mine. I wasn’t alone, for Gary’s accumulation of devoted friends spanned many decades. He was admired and loved by so many. And deservedly so. Because it was easy to do.

Gary Dorst died at the age of 65 in his sleep sometime between Jan 13-14, 2013. And I’m grieving. But it’s his wife, Joyce, and his children, grandchildren and surviving family who are grieving most of all. His close friend, Dick Klemensen…I cannot imagine what he must be going through. As I said, there are many, many more who cherished Gary. He was a gift, you see. And we all knew it.

Dear friends, if you knew him you know how difficult it will be to reconcile his passing. He will live within our hearts and memories. I still see us at Paramount Studios on the Enterprise bridge set of Star Trek IV when a friend gained us access while the soundstage was dark. He’s sitting across from me at Table 14 at Forry Ackerman’s birthday bash in Hollywood. He’s posing outside of the ABC-TV corporate headquarters in New York City as I snap his picture. And we’re sitting together in his car in Madison, Wisconsin, him coaxing this would-be writer to send a John Russo interview to Fangoria magazine because he was so sure they’d publish it. So I did. And they published it just like he said. The vivid and happy memories of this human being! I laugh with joy – my heart uncontrollably weeps.

Good-bye, Gary. We love you. Always did and always will. Your loss is incalculable. Your influence and unwavering friendship will never be forgotten. God bless you.