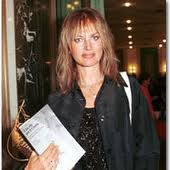 Dalila Di Lazzaro was born on January 29, 1953 in Udine, Friuli-Venezia, Italy. She began her career in showbiz as a model and was used by different designers and was chosen for a series of commercials for a famous eye drops.

In 1972 he made her film debut in the Euro-western “It Can Be Done Amigo” with Bud Spencer and Jack Palance using the alias Dalila Di Lamar. She followed this film using the same alias in several films in minor roles until 1974 when she starred in “Il mostro è in tavola... barone Frankenstein” directed by Paul Morrissey. This was followed by a lead in “Oh, Serafina!” (1976), thanks to her beauty, Di Lazzaro was chosen and cast in films in the role of the femme fatale, turning out more than thirty films and television, becoming a leading protagonist of Italian cinema of the 1970s to 1990s. She made films in France, Switzerland and the United Kingdom.

In 1991, following the sudden loss of her 22 year-old only son Christian who was killed in a car accident she withdrew from the film industry. In subsequent years, the actress was subject to a form of chronic pain, as a result of a motorcycle accident that caused the fracture of a neck vertebra, forcing her to stay in bed, recovering for a long time.

Only recently has Dalila Di Lazzaro returned to appear on television. She also found a new way to communicate and connect with her audience, by writing, where she is able to shed light on the serious problem of her chronic pain. In 2006 she published her first book-length autobiography, which became a best-seller, entitled Il mio cielo (My sky), followed by “L'angelo della mia vita:  Piccoli miracoli intorno a me” (The Angel of My Life: Small Miracles Around Me) (2008), dedicated to her son Christian, “Touch my heart. Love, feelings and passions of my life” (2009), her second autobiographical novel, and “Il mio tesoro nascosto” (My Hidden Treasure) (2011).

In addition to writing, Dalila Di Lazzaro, is also involved in working for social purposes: during the Fashion Week in Milan in 2011, an event organized every year by Camera Moda, she was placed at the head of the so-called "sentinels anti-anorexia" having to monitor the models and to report their health to the Alderman of Milan for any pathological risks. She is also a proud champion in the fight for adoptions by unmarried parents, even though this is difficult to achieve in Italy because of red tape and legal issues, which has led her to lead a real movement of her private opinion.

A lover of the sea, she now lives, writes and works in Milan and on the French Riviera. Today we celebrate the 60th birthday of Dalila di Lazzaro.