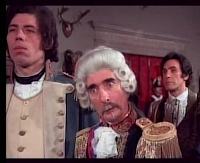 Bruno Alias was born on January 8, 1928 in Cagliari, Sardinia, Italy. Once a model, he was one of many often seen but unknown character actors who flooded the films of Italian cinema from the mid-1960s to the late 1980s. Seldom given speaking roles he was often seen more as an extra in background shots (as in the picture posted far right background from "Eh? Who's Afraid of Zorro!) of all type of genre films during this period. The Thrilling Forum website has identified him in over 125 films and television series. Among his many film appearances were two Euro-westerns: “Tepepa” (aka “Blood and Guns”) (1968) as a Mexican revolutionary and “Eh? Who’s Afraid of Zorro! (1975) [seen in the photo above] where he’s seen as a nobleman. Alias died in Rome, Italy on April 10, 1996. We remember Bruno Alias today on what would have been his 85th birthday.